“I have a dream that enough is enough.”

Those were the words of nine-year-old Yolanda Renee King, invoking the famous speech of her grandfather Martin Luther King, Jr. as she addressed the March for Our Lives in Washington, D.C. in March 2018.

Yolanda’s words were moving, calling attention to the gun violence that kills 96 people every single day in America, a disproportionate number of which are African American. However, what failed to grasp national attention was the particular relevance of Yolanda’s presence at the March and the role in which her grandfather played in forming today’s movement to prevent gun violence.

Martin Luther King Jr.’s commitment to nonviolence to achieve civil rights and racial justice came to a violent end 51 years ago today when he was shot and killed in Memphis, Tennessee. 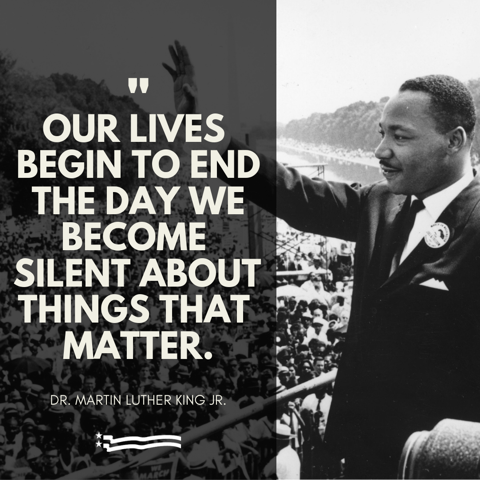 Dr. King’s death, which came several years after the assassination of President John F. Kennedy and just a few months before the shooting murder of Robert Kennedy, sparked outrage across the country, even causing some to question whether nonviolence was indeed the path to racial equality. His assassination further fueled the growth of the Black Power movement generating fear among pockets of white America of an armed Black community. The civil unrest in the wake of Dr. King’s death which eventually played out in legislators’ backdoor in the DC riots made gun violence an issue that could no longer be ignored.

In the wake of Dr. King’s assassination along with both Kennedy brothers, lawmakers and President Lyndon B. Johnson began looking at legislative alternatives and subsequently passed the 1968 Gun Control Act. One of the first major pieces of legislation governing the sale of firearms in the United States, the Gun Control Act created the present-day system of Federal Firearm Licences (FFLs). Unfortunately, while the Gun Control Act ushered in the modern era of gun dealer licensing, it also initiated the formation and exponential growth of the gun lobby.

As Johnson worked to get legislation through Congress, groups like the National Rifle Association (NRA), which had previously focused on outdoor sports and conservation, began to take more political stances fighting against efforts to restrict access to firearms. By the 1980s the gun lobby’s influence within Congress was undeniable.

It wasn’t until years later in 1993 that another meaningful piece of gun violence prevention legislation was passed. After years of trying, with opposition largely fueled by the gun lobby, the Brady Handgun Violence Prevention Act was finally passed in 1993 mandating that all FFLs conduct background checks on individuals wishing to purchase a firearm.

In the decades following the passage of the Brady Law, gun violence prevention, labeled “gun control” by the gun lobby, became a contentious issue for many politicians and was commonly referred to as the “third rail” for its ability to kill any campaign for public office. This has changed in the wake of the unchecked growth of America’s gun violence epidemic. Lack of movement by our legislators on even the simplest solutions, such as expanding Brady background checks to include internet sales and other gaps or restricting assault weapons and high capacity magazines, led a frustrated constituency to seek elected officials who would take a stance on gun violence prevention. The 2018 midterms made the public’s mandate clear, with a gun violence prevention majority entering Congress for the first time in a generation.

As Dr. King’s life and accomplishments are honored today, we invite you to also consider his role in shaping the gun violence prevention movement in our country.