IF YOU OR SOMEONE YOU KNOW IS CONTEMPLATING SUICIDE, PLEASE CALL THE FREE AND CONFIDENTIAL NATIONAL SUICIDE PREVENTION LIFELINE AT 1-800-273-8255. PRESS 1 TO BE CONNECTED WITH THE VETERANS CRISIS LINE.

In 2019, the most recent year for which data is available, a total of 47,511 people died by suicide in the U.S. and more than half of those deaths (23,941) involved a firearm. According to the 2020 Veteran Suicide Prevention Annual Report from the U.S. Department of Veterans Affairs (VA), the suicide rate for veterans is one and a half times the rate for non-veteran adults, after adjusting for population differences in age and sex. Every day, about 17 veterans die by suicide, and 12 of those 17 veterans (68%) die from a self-inflicted firearm injury. In addition, the Department of Defense 2020 Annual Suicide Report found that there were 498 suicide deaths among service members in 2019, 318 (64%) involved a firearm. While veterans make up about 7% of the U.S. adult population, they account for 18% of the nation’s gun suicide deaths.

Some communities are uniquely at risk for suicide. As a group, service members and veterans are uniquely at risk for suicide partly because they are more likely than their civilian counterparts to have access to firearms, and they have the knowledge and training in how to use them. Nearly half of all veterans own at least one firearm, while about one-third of U.S. adults own a firearm. Firearms are, by far, the most lethal method used in suicide attempts: 90% of suicidal acts with a firearm result in death. Firearms are used in 68% of veteran suicides compared to 48% of non-veteran suicides. Among military service members, firearms were used in 60% of suicides among the Active Component, 66% of suicides among the Reserve, and 79% among the National Guard. The availability and effectiveness of firearms greatly increases the risk of a fatal outcome should someone attempt suicide.

“I’ve had five friends take their life via firearms.”

In an open-ended follow-up question, 71% of the qualitative respondents stated that this firearm violence was related to the suicide of a friend or family member.

The veteran community understands the gravity of this issue and the urgent need for action to address the problems of suicide. The abundance of evidence from veteran service organization membership surveys demonstrates the need for evidence-based approaches to preventing suicide through lethal means safety especially the safe storage of firearms.

Multiple studies link the accessibility of firearms with higher suicide rates: States with the highest rates of household firearm ownership have higher rates of suicide overall than states with the lowest household firearm ownership rates, even though rates of non-firearm suicide are comparable across these states. While owning a firearm does not increase suicidal thoughts, access to a gun in the home increases the risk of suicide death by 300%. 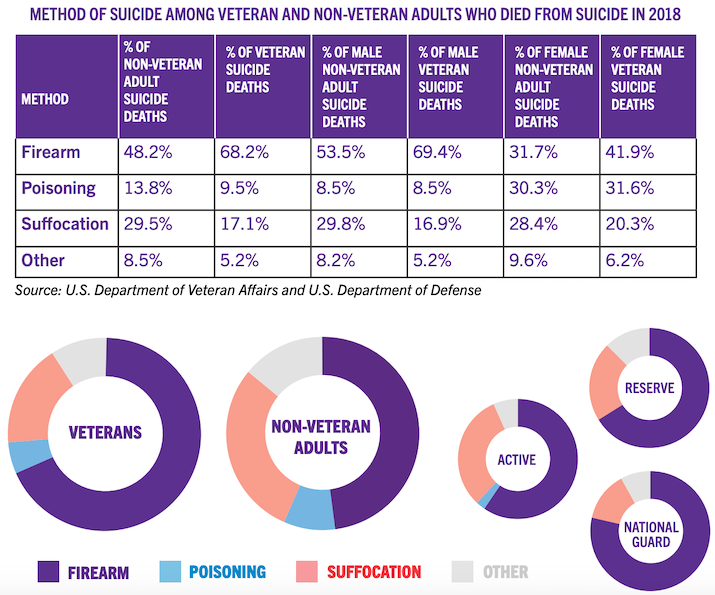 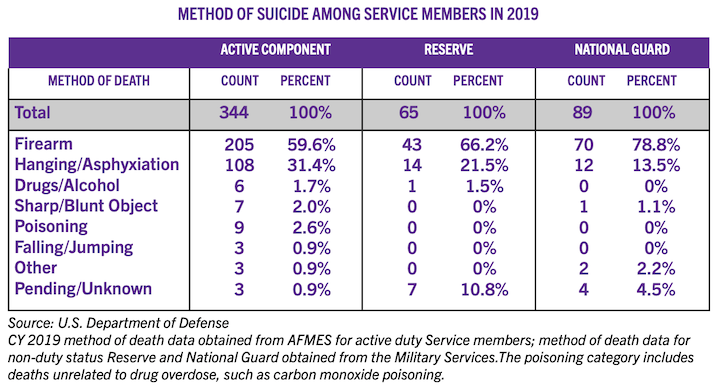 According to the VA, one way to reduce the risk of suicide among veterans is to build time and space between a veteran who has expressed thoughts of suicide by a firearm. If a person is considering suicide or is at risk of a personal crisis, safe storage of a firearm can help prevent a dangerous, lethal suicide attempt. If a lethal attempt can be avoided, a veteran might have more time to seek help during a difficult time.

Read the full fact sheet
Download
Back to Fact Sheets