Transgender rights are a gun violence prevention issue. Tragically, over the past few years, the number of transgender people killed in the U.S. has been on the rise. In 2020, the Human Rights Campaign identified at least 44 fatalities; in 2021, it identified 57. And sadly, these numbers may be even higher as trans deaths are often unreported or misreported. We do know, however, that the vast majority of homicides of transgender Americans are perpetrated via gun violence. In 2019, the American Medical Association identified violence against trans people as a national epidemic — so is gun violence. Internationally, the U.S. ranks third for the highest number of homicides against trans people, after Brazil and Mexico. Furthermore, the intersection of gun violence and race is relevant in the trans community as well: Black trans women are disproportionately impacted by fatal violence and comprise nearly two-thirds of homicides among trans people. 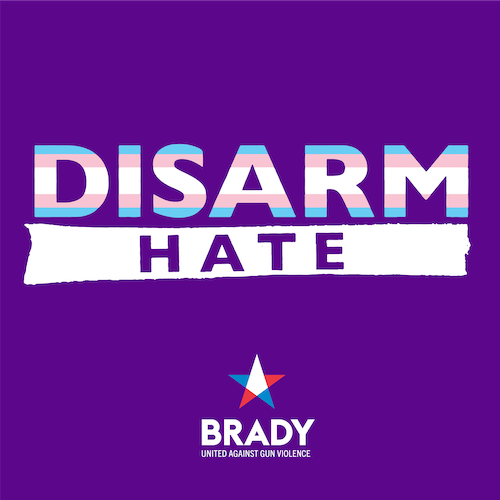 Transgender Americans are also targeted for hate crimes at higher rates than cisgender Americans. A quarter of trans Americans will experience a hate crime in their lives, and they are over four times more likely than cisgender people to be victims of violent crime. Even if the violence is not fatal, these incidents present life-changing consequences for the people who experience them. Around 40% of transgender people attempt suicide in their lifetime and trans adults are about five times more likely than cisgender adults to attempt suicide.

In 2022, state governments introduced a record-breaking number of anti-transgender bills. Also this year, the Supreme Court effectively increased the proliferation of firearms, ruling that the right to carry a firearm in public spaces is a constitutional right. These compounding factors and the legality of LGBTQIA+ panic defenses in 35 states puts the lives and safety of trans people at risk more than ever.

Transgender women of color are exceptionally prone to the deadly consequences that arise from the intersections of racism, sexism, transphobia, and unchecked access to guns.

To talk about that and more, hosts JJ Janflone and Kelly Sampson are joined by Imara Jones, writer, activist, and creator of TransLash.

The LGBTQIA+ panic defense further emboldens assailants to commit gun violence similar to problematic “stand your ground” laws. For example, both “stand your ground” laws and the LGBTQIA+ panic defense are used to excuse a perpetrator’s violent reaction under the guise of self-defense. The LGBTQIA+ panic defense has appeared in court opinions of half of the fifty states since 1960. Since then, only sixteen states have banned this tactic, which legitimizes violence against the LGBTQIA+ community and weaponizes their identities against them in court. In particular, the panic defense allows perpetrators of hate crimes to escape accountability by claiming defenses of insanity by diminished capacity, provocation, or self-defense. All three arguments justify the assault and dehumanization of transgender people by placing the onus for a defendant’s violence on the victim’s sexual or gender identity. Tragically, some of these defenses have been successful.

Throughout history, trans people have been targeted with extraordinary and fatal violence only to be maligned in court with LGBTQIA+ panic defenses. In 2013, Bella Evangelista, a well-known trans performer in Washington, D.C., was shot and killed when a man discovered she was transgender. The defense attacked Evangelista’s gender identity falsely claiming, “transgender people are generally violent people, so that is why the defendant brought a gun to confront the victim.” In 2017, Monica Loera’s assailant falsely accused her of stealing his wallet when he killed her with a bullet to the neck. The shooter was convicted of a first-degree felony and was eligible for 99 years in prison, but received only a twenty year sentence from a Travis County, Texas jury. This sentence makes him eligible for release just ten years after he murdered Loera. The legal system sends the message that trans lives are unimportant when it fails to provide a fair trial and protect transgender Americans from gun violence.

Since the Supreme Court’s decision in NYSPRA v. Bruen in June 2022, Americans are newly concerned about their safety in public spaces like school campuses, the D.C. Metro, and the streets of their own neighborhoods. An August 2022 poll by the Associated Press and the NORC Center for Public Affairs Research at the University of Chicago reported that 80% of respondents believed gun violence in America was on the rise, 75% of surveyed Americans perceived gun violence was “a major problem,” and 71% wanted stricter gun laws.

But transgender people in the U.S., especially Black trans women, have always been vulnerable to violence solely by stepping into the public sphere. Their existence unfairly requires constant resistance to bigotry, intimidation, and cruelty. The right not to be shot, a phrase coined by Jon Lowy and Brady Legal’s Kelly Sampson, is an intrinsic right that all Americans should have, regardless of gender and sexual identity. But easy access to guns everywhere puts this right at risk. Transgender Americans, who already struggle to obtain and maintain the same rights as cisgender Americans, are even more vulnerable to gun violence. As part of the movement to prevent gun violence, we must fight to save trans lives.

As activist and founder of TransLash, Imara Jones, said on Red, Blue, and Brady, “We believe that fighting ignorance is a key to keeping trans people alive. . . we tell trans stories to save trans lives.” And transgender rights advocates around the country are continuously organizing, educating, and litigating for change. Organizations like the National Center for Transgender Equality and the ACLU LGBT Project are tracking anti-trans legislation and empowering individuals to contact their legislators and share their concerns. In addition, Jones’s Translash Media has compiled trans-affirming mental health resources for queer and trans communities. The Transgender Law Center hosts a pro bono legal resistance network for impact litigation and legal aid efforts supporting transgender and gender nonconforming people. Lastly, we, in the gun violence prevention movement, will continue to highlight research and advocate for legislation that addresses the intersections of gun violence, hate crimes, and LGBTQIA+ rights.