Join Brady, Stack Up, and PsychArmor on Twitch to Discuss Preventing Veteran Suicide 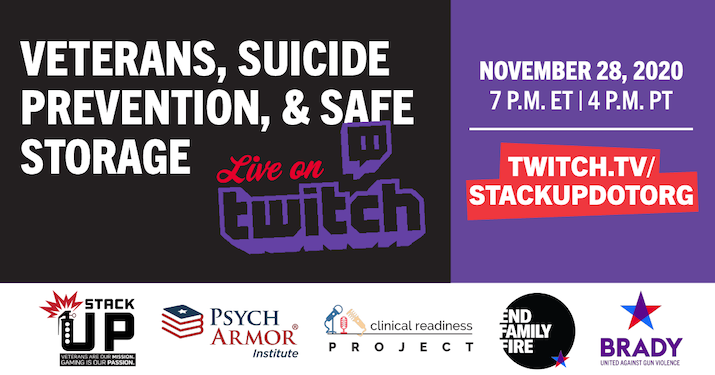 An average of 17-20 veterans die by suicide every day, and approximately two-thirds of them do so by firearm. Yet, a recent survey by Brady and the Ad Council found that 76% of Americans don't know that suicide is the number one type of gun-related death in the U.S. We can prevent these tragedies the more that people — including veterans and their loved ones — know about the actions that they can take to end family fire.

In recent years, Twitch has quickly become the go-to platform for online streamers, most especially for gamers. As of February 2020, the site had been used by 3.8 million unique users, numbers we can only assume rose as Americans prepared to spend their spring and summer months primarily indoors.

Sadly, earlier this year Twitch lost two popular streamers to suicide. On July 2, 2020, the Twitch community mourned the loss of Byron Bernstein, 31, better known as “Reckful.” He had just under a million followers, and had been working as a developer to create his own video game. Bernstein was well known in the gaming community, ranked #1 in World of Warcraft for 6 consecutive seasons. Later that same week, the Twitch community also lost Lannia Ohlana, 26, to suicide. Using just her surname “Ohlana,” the Canadian-Vietnamese streamer was popular for streaming Counter-Strike: Global Offensive, and openly expressed signs of emotional distress in the days leading to her death.

The close timing of these deaths rightfully drew concern from the Twitch community, but have fortunately not been subsequently replicated. Nevertheless, they have prompted users to take a closer look at Twitch’s policies related to suicide and self-harm, and prompted the Twitch Cares initiative to be launched, which provides mental health resources for streamers and those who watch them.

What's the Connection Between Video Games and Preventing Veteran Suicide?

Well, 60% of Americans play video games daily! In an exploratory study of active duty, U.S. military and veteran gamers, it was found that almost half of the participants used video games to cope with challenges associated with their military service. Their coping mechanisms included escapism, managing self-diagnosed physical and/or psychological ailments, seeking social support (particularly through massively multiplayer online games). and connecting with civilian life.

Stack Up is a military charity supporting active and veteran service members from the U.S. and allied nations by promoting positive mental health and combating veteran suicide through gaming and geek culture. Stack Up helps U.S. and Allied military service members get through deployments to combat zones and recover from traumatic physical and emotional injuries with the power of video gaming.

PsychArmor’s mission is to educate a nation by providing critical resources to Americans so they can effectively engage with and support military service members, veterans, and their families. They do this by creating data-driven and evidence-based online training videos delivered by nationally recognized subject matter experts who are fiercely committed to educating the civilian community about Veterans and military culture. PsychArmor is the only national institute that not only offers free online education, but also has a support center staffed with mental health experts. PsychArmor coaching and support staff are dedicated to assisting military service members, veterans, their loved ones, employers, healthcare providers, educators, and communities.

Brady’s inaugural Sarah Brady Fellow, Dr. Kyleanne (Ky) Hunter is a US Marine Corps combat veteran who served multiple tours in Iraq and Afghanistan as an AH-1W “Super Cobra” attack pilot, and in doing so was awarded seven Air-Strike medals. She also served as the Marine Corps’ Legislative Liaison Officer to the House of Representatives and the military liaison for the House Democracy Partnership. A long time gun violence prevention advocate, she co-founded Vets for Gun Reform and is currently an adjunct professor at Georgetown University’s Masters’ in National Security Studies program. She also serves as the chair of the Employment and Integration subcommittee of the Secretary of Defenses’ Advisory Committee on Women in the Services.

Dr. Ted Bonar is a clinical psychologist and a nationally recognized trainer and speaker at conferences and universities. In addition to running his own practice, he is the Executive Director of the Clinical Readiness Project, a 501(c)3 nonprofit organization. He is known as a Subject Matter Expert in Post-Traumatic Stress Disorder, suicide, military and veteran mental health concerns, and lethal means safety. He serves on the Healthcare Advisory Committee for PsychArmor Institute, and was previously the Chief of Continuing Education Programs at the Center for Deployment Psychology (CDP) where he oversaw and implemented training programs focused on common military-related behavioral healthcare concerns, evidence-based treatment of PTSD, and suicide prevention and treatment.

Dr. Heidi Squier Kraft received her Ph.D. in clinical psychology from the UC San Diego/SDSU Joint Doctoral Program in Clinical Psychology in 1996. She joined the Navy during her internship at Duke University Medical Center and went on to serve as both a flight and clinical psychologist. While on flight status, she flew in nearly every aircraft in the Navy and Marine Corps inventory, including over 100 hours in the F/A- 18 Hornet. In February 2004, she deployed to western Iraq for seven months with a Marine Corps surgical company, when her boy and girl twins were 15-months- old. She currently serves as Chief Clinical Officer at PsychArmor Institute, and is frequently invited to speak on trauma, compassion fatigue, and resilience. Dr. Kraft is a lecturer at San Diego State University, where she teaches stress, trauma and the psychological experience of combat, as well as abnormal psychology, health psychology, and infant and child development. She lives in San Diego with her husband Mike, a former Marine Corps Harrier pilot, and twins Brian and Megan, who are now in college and have no memory of their mother’s time in Iraq.