A Decade Before Columbine, There Was Cleveland Elementary School 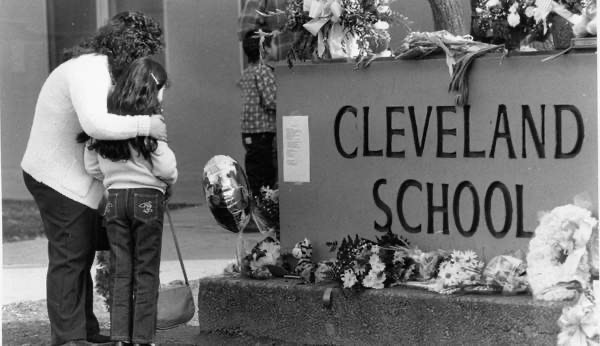 On January 17, 1989, a 26-year-old man drove to Cleveland Elementary School in Stockton, California, armed with an assault rifle and a 9mm Taurus semi-automatic handgun. First, he set his car on fire behind the school. Then he walked into the schoolyard where some 300 students were playing during recess. He opened fire with the assault rifle, and within just three minutes, he fired off at least 105 rounds, killing five students and wounding more than 30 others. After the carnage, he picked up his handgun and shot himself. 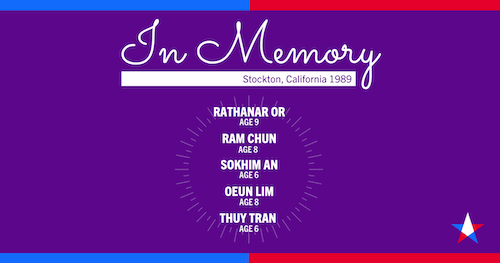 All five students killed were between the ages of six and nine, and were the children of Southeast Asian refugees. 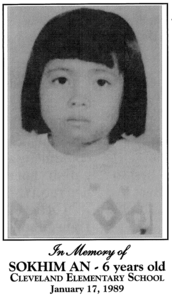 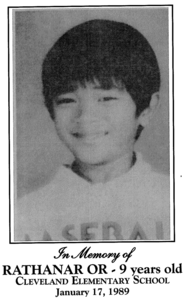 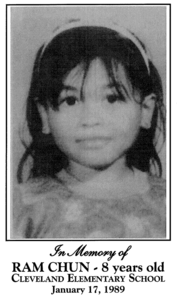 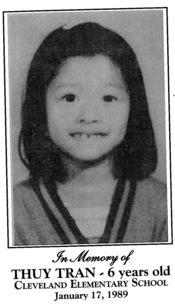 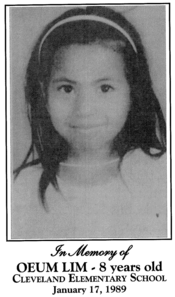 The Cleveland School shooting, also known as the Stockton Schoolyard shooting, was certainly not the first mass school shooting in America, nor did it claim the greatest number of lives. But, as the first mass school shooting in the age of 24-hour cable news, the Cleveland School massacre of 1989 stunned the nation as Americans saw images of the shooting and its aftermath in endless cycles. And as one Sacramento magazine writer observed in a retrospective article, America has "struggled ever since to reconcile the image of fallen kids with the power of its gun culture."

Julia Schardt and Judy Weldon were teachers at Cleveland Elementary at the time of the incident, and were asked to help identify one of the students killed in the schoolyard. Described as one of the hardest things they ever had to do, they, along with other fellow teachers, founded Cleveland School Remembers, a local grassroots chapter of Brady.

Why is it still so easy for dangerous people to get their hands on dangerous weapons, including assault weapons intended only to kill as many people as possible, as quickly as possible?

The Cleveland School shooter had a long history of alcohol and drug abuse, mental health issues, and repeated run-ins with law enforcement and arrests resulting from drug dealing, armed robbery (a felony), various gun violations, and other crimes. He had received periodic mental health counseling, reporting to one mental health professional that he was “struggling to resist actions on thoughts which are destructive in nature.” He attempted suicide twice while in prison, and was deemed in one psychiatric assessment to be a danger to himself and others.

However, despite this alarming record, the shooter was able to legally purchase the AK-47 assault rifle and the 9mm pistol used in the Cleveland Elementary School shooting because he was never convicted of a felony (his one felony arrest had been plea bargained to a misdemeanor). State law in Oregon at the time, where he purchased the AK-47 at the Sandy (OR) Trading Post, allowed assault rifles to be sold with minimal paperwork and no waiting period. The handgun was purchased in a Stockton, California, pawn shop.

In the wake of the shooting, one immediate and unprecedented change happened: The state of California quickly passed the Roberti-Roos Assault Weapons Control Act of 1989 — the nation’s first assault weapons ban — named for its champions in the California legislature. The law made illegal the ownership and transfer of over fifty specific brands and models of semi-automatic firearms classified as assault weapons, including the model used by the Cleveland School shooter. The law was expanded 10 years later to restrict magazines that could hold more than 10 rounds of ammunition.

It would be another five years until the U.S. Congress would pass a federal assault weapons ban, which was largely in part of Sarah and Jim Brady's efforts, and was introduced by Sen. Dianne Feinstein on September 13, 1994. It was signed into law the same day by President Bill Clinton.

Also on the national level the Brady Handgun Violence Prevention Act was passed in November 1993, requiring federally licensed gun dealers to run background checks on firearm purchasers through the National Instant Criminal Background Check System (NICS) to see if they are a prohibited purchaser — a felon, fugitive, domestic abuser, or dangerously mentally ill. Since the Brady Bill went into effect, more than 3.5 million prohibited purchases have been blocked.

These measures have helped save countless lives and caused gun crimes to plummet. But it is undeniable that guns are still finding their way into dangerous hands, leaving our schools and communities vulnerable.

So where have we failed?

Congress allowed the federal assault weapons ban to expire in 2004 in accordance with its sunset provisions. Sen. Feinstein, its original sponsor has re-introduced it, along with a ban on large capacity magazines, but the bill was blocked in large part due to overwhelming Congressional opposition bought and paid for by the powerful gun lobby.

Other loopholes also include the “Charleston Loophole,” which allows licensed dealers to proceed with a gun sale after three business days even if a Brady Background Check has not been completed. This loophole enabled a young man with a criminal history to legally purchase a gun he used to kill nine people in the 2015 Charleston church massacre.

Where Do we Go From Here

The 31st anniversary of the Cleveland School shooting brings a new promise of hope. With the 116th Congress delivering on their promise of addressing gun violence in a meaningful way, we have an unprecedented opportunity to strengthen our existing gun laws and pass new common-sense measures a vast majority of Americans are in support of.

Currently, the House of Representatives passed H.R. 8, a bill that would expand Brady Background Checks to all gun sales, including online sales and those at gun shows. They have also passed H.R. 1112, The Enhanced Background Checks Act of 2019, which closes the "Charleston Loophole" and extends the background check review period from three to 10 business days. In the Senate, Sen. Feinstein introduced The Assault Weapons Ban Act of 2019.

In state legislatures across the country, Seventeen states and Washington, D.C., have enacted versions of extreme risk laws. An Extreme Risk Protection Order (ERPO) provides a legal means to temporarily remove guns from those who pose a danger to themselves or others. It lets judges consider evidence from law enforcement officials, mental health professionals, and family members to then decide whether guns should be temporarily removed.

As we remember the victims of the Cleveland School shooting 31 years ago, and victims of gun violence and suicide everywhere, we must honor the lives lost with action. We know what to do, and it's in our hands to end gun violence. But for far too long, Senate Majority Leader McConnell has refused to act on common-sense gun violence prevention legislation. The House of Representatives introduced lifesaving, bipartisan legislation more than one year ago; however, each and every gun safety bill has yet to be acted on by Senator McConnell.