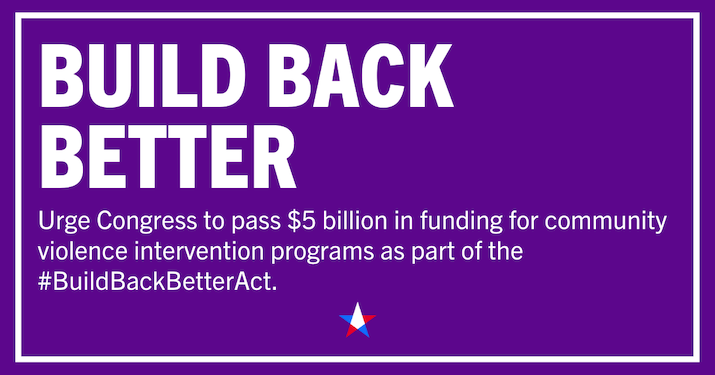 Did you know that President Biden's Build Back Better Act includes $5 billion for community violence intervention (CVI) strategies? It's perhaps the largest investment in gun violence prevention ever.

The vital funds in the Build Back Better Act would ensure Black and Brown communities disproportionately impacted by gun violence have access to evidence-based resources that are proven to break cycles of violence.

In America, cycles of gun violence are exacerbated when Black and Brown communities are not given equal access to education, housing, jobs, health care, mental health and trauma services, and more. But thanks to the tireless advocacy of Black and Brown-led organizations, President Biden proposed $5 billion for CVI strategies that will help break vicious cycles of gun violence by providing local, on-the-ground resources to impacted communities. This vital legislation passed the U.S. House. Now, we're calling on the U.S. Senate to do the same.

We need your help to ensure this life-saving funding becomes a reality.

Please, call the U.S. Senate and tell them to support the Build Back Better Act!

For too long, gun violence has wreaked havoc on underserved, Black and Brown communities:

With this landmark funding, communities that are disproportionately impacted by gun violence would have access to evidence-based resources that are proven to break cycles of violence, like GED tutoring, mental health counseling, housing support, and more. Funds would also go toward rebuilding relationships between law enforcement officials and local communities.

We know this kind of investment will save lives: Gun homicides in Richmond, CA, dropped by 71% in less than 10 years after the city funded community violence intervention. We can achieve the same results nationwide.

This is our last chance to put pressure on the Senate to pass the Build Back Better Act. Here are more ways you can act now!

Join us for a phone bank