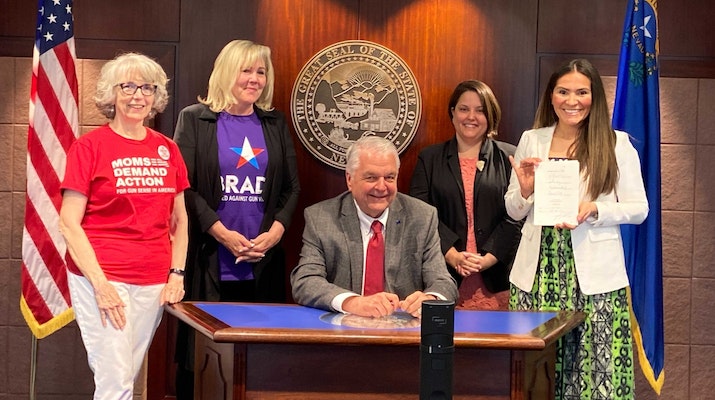 Washington, D.C., June 7, 2021 - Today, Brady celebrates Nevada’s newest law: AB 286, which was signed into law by Nevada Governor Steve Sisolak this afternoon after passing both chambers of the Nevada Legislature. This law will ban and prevent the further proliferation of ghost guns - firearms constructed from unfinished and unserialized frames and receivers that are often sold in kits that can be assembled into fully functioning firearms. This new law makes Nevada one of only several states with such bans, helping to stop this existential threat to public safety and keep all Nevadans safe

“This is a historic day for Nevada; the state legislature and Gov. Sisolak have acted swiftly and in the best interest of all Nevadans to ban untraceable ghost guns across the state. With this law, Nevada joins other states and localities like the District of Columbia, Hawaii, and New Jersey in banning the parts and kits used to assemble these untraceable weapons. Nevada’s ban will be one of the strongest ghost gun bans in the country and will regulate these weapons for what they actually are: firearms. These weapons threaten public safety and law enforcement, undermining nearly all existing gun violence prevention laws. They are an existential threat to communities across the country. Brady thanks Nevada’s legislature and Gov. Sisolak for clearly identifying that fact and acting to address it.

This new law is thanks to the sustained efforts and advocacy of activists across Nevada, including and especially Battle Born Progress. We are grateful for their leadership and to Assemblywoman Sandra Jauregui, herself a survivor of the mass shooting at the Route 91 Harvest Music festival in Las Vegas on October 1, 2017, for introducing and stewarding this legislation.”

BREAKING: @GovSisolak just signed into law one of the nation's first bans on "ghost guns."

Ghost guns are unregulated, untraceable firearms that are a growing murder weapon of choice. With this law, Nevada is a model for the states across the country! #NVleg #EndGunViolence https://t.co/EKeqatDxUj

AB 286 would prohibit an individual from possessing, selling, transferring, or purchasing an unfinished frame or receiver, which can be easily assembled into a ghost gun. The bill would likewise ban the possession of existing ghost guns beginning in January 2022. This bill includes common-sense carve outs such as an exception for firearms importers or manufacturers and for certain types of firearms including those rendered permanently inoperable, antiques or collector’s items, such as for hobbyists or collectors.

Brady and Team ENOUGH released a video exposing the ease of evading a background check and purchasing an unregulated and untraceable "ghost gun" kit.

Ghost guns are unserialized and untraceable firearms that are often made from "ghost gun kits," that can be bought online, at gun shows or at gun stores and assembled at home. "Ghost gun kits," include all of the parts and often the equipment necessary to build these weapons at home. These kits are widely available and can be purchased by anyone, including prohibited purchasers, domestic abusers, and gun traffickers — without a background check. As these kits and guns are sold at gun shows and online every day throughout the country, they undermine all of the life-saving policies that state legislatures have fought so hard to put in place.

This is a growing concern, as:

Two states, Hawaii and New Jersey, and two cities, Philadelphia and Washington, D.C., have already instituted bans on ghost guns or parts and kits used to assemble these weapons, and several other states including California, Rhode Island, and Connecticut have also passed laws regulating ghost guns. Both New York state and San Francisco are considering legislation surrounding ghost guns, and the parts and kits used to assemble ghost guns as well bans.

Represented by Brady and the international law firm Orrick, Herrington, & Sutcliffe the survivors and the families of the people killed in the 2017 mass shooting in Rancho Tehama, California, recently brought forward McFadyen v. GhostGunner Inc., the nation’s first two civil lawsuits by victims of gun violence against the ghost gun industry.

Plaintiffs allege in the complaint that the defendants have chosen to engage in a business that utilizes online loopholes that enable prohibited purchasers to acquire weapons without a Brady Background Check or any interaction with a Federal Firearms Licensee (FFL). In doing so, Brady alleges that the defendants have chosen to intentionally undermine federal and state gun laws by designing, marketing, and selling ghost gun kits and firearms parts, which allowed the Rancho Tehama gunman, who was barred from purchasing or possessing a firearm, to obtain two AR-15-style ghost guns. During the gunman’s shooting spree in November 2017, he killed five people and injured 18 others at eight separate crime scenes, including an elementary school.