Washington, D.C., March 1, 2022 - Today, Brady applauds President Biden for including a call for increased funding for community violence intervention programs and for demanding that Congress pass common-sense and comprehensive gun violence prevention bills. President Biden reiterated his attention and commitment to this issue, but more action is required to address this uniquely American epidemic. Since President Biden took office, over 49,500 people have died from gun violence. In 2022 alone, 3,015 people have died from gun violence; 166 children and 661 children have been shot; and, there have been 70 mass shootings.

“We are heartened by President Biden’s words tonight, but we need continued and increased action and attention to ending America’s gun violence crisis.

President Biden has already taken extensive and historic action, but he cannot let up. He also cannot solve this problem alone. His calls for legislative fixes such as universal background checks, banning assault weapons and high-capacity magazines, and repealing PLCAA, the liability shield for gun manufacturers, are common-sense and will save lives. Congress must also pass the $200 million for community violence interventions the President has asked for in Fiscal Year 2022 appropriations, and the proposed investment of $5 billion over eight years that was included in the Build Back Better Act, arguably the largest investment in gun violence prevention ever.

Over 81 million Americans voted for President Biden because of his ability to handle the many problems facing our nation. He and Congress must not let the crisis that kills over 100 Americans every day fall to the wayside. His speech tonight reiterated his commitment to this issue tonight. We need him to remain steadfast and to make gun violence an even greater priority in the year ahead.”

About President Biden’s Actions in 2021:

In his first year in office, President Biden has taken immediate and decisive steps using his executive authority to address gun violence in all of its forms. This includes a suite of executive actions announced in April that include a much needed proposed rule to regulate dangerous, untraceable ghost guns, a comprehensive violence reduction strategy that takes a supply side approach to addressing gun violence, and an emphasis on Veterans and suicide prevention that includes safe storage guidance. 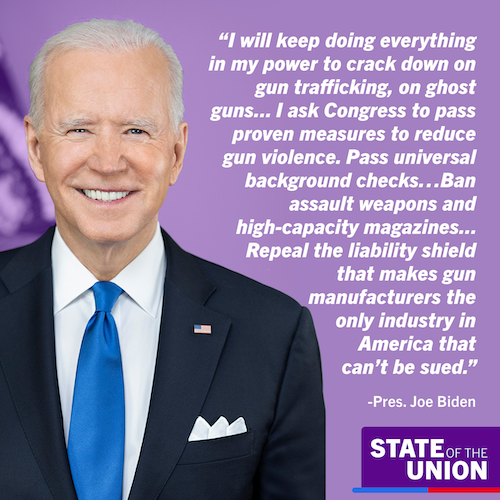