“Today’s announcement demonstrates once again that the Biden-Harris Administration is committed to tackling gun violence as a complex, multifaceted public health crisis. This focus on family fire, a shooting involving an improperly stored or misused gun in the home that results in death or injury, will help to address the largest portion of gun deaths each year, gun suicide. This crisis is particularly acute in the veteran community, clearly why President Biden and the Biden-Harris administration have released a comprehensive strategy to address gun suicide in the Veteran community. These actions will save lives. That the administration has identified the need to emphasize safe storage and opted to work with gun dealers, the cornerstone and front lines of preventing gun violence and especially gun trafficking, shows that they understand the scope of gun violence in America and are willing to take necessary, evidence-based steps to end it.

Brady thanks President Biden and the Biden-Harris administration for these needed actions and their continued focus on ending gun violence in all of its forms.” 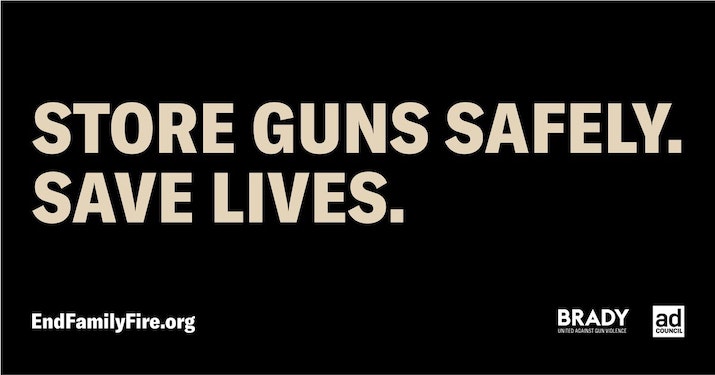 End Family Fire, a joint effort from Brady and the Ad Council, aims to encourage safe gun storage by putting a name to the preventable tragedies that occur when guns in the home are misused. “Family fire,” a term developed for this lifesaving effort, refers to a shooting involving an improperly stored or misused gun found in the home that results in death or injury. Incidents of family fire include suicides, unintentional shootings, and other gun-related tragedies.

The End Family Fire program aims to bring awareness to the issue of family fire, give gun owners a role in gun violence prevention, and encourage a national dialogue around safe storage practices — all of which can help prevent tragedies of family fire.

About the Biden-Harris Administration’s Announced Actions:

The Biden-Harris administration has announced three actions aimed at preventing gun suicide. These actions included needed emphasis on the safe storage of firearms and outreach to firearms dealers nationwide to help promote best practices regarding sales and dissemination of safe storage information. These actions target several of the drivers of gun violence, particularly emphasizing the role in which gun dealers play in preventing sales to individuals clearly in distress or to individuals who may be purchasing firearms to traffick or resale illegally. These three actions include: