Brady has used Pennsylvania's Gun Tracing Analytics Platform and the Bureau of Alcohol, Tobacco, Firearms, and Explosives’ (ATF) listing of federal firearm licensees to uncover trends in crime gun trace data — finding that a small number of gun dealers in Pennsylvania appear to be responsible for a large portion of the crime guns recovered by law enforcement in the state.

This is the most important gun trace dataset the public has seen in decades. It can be used to steer further analysis and inform enforcement and oversight strategies to help stop the flow of crime guns.

“This dataset and report illustrate why supply side strategies are critical to stemming the flow of illegal guns and stopping gun violence.

WHAT IS TRACE DATA & WHY IS IT IMPORTANT?

When a firearm is found at a crime scene or associated with a crime scene, law enforcement agencies can trace that firearm by inputting information about the firearm into the ATF’s eTrace system. The ATF can follow the flow of that firearm through legal construction or importation to a federally licensed firearms dealer, and finally to the firearm’s original purchaser. At any point in this commercial flow from manufacturer/importer to a firearm sale, firearms can be diverted toward the “illegal firearm market.”

It is vital that law enforcement trace crime guns to determine the origins of these weapons and investigate patterns of diversion to the illegal market to stop the flow of crime guns. Access to this data can enable the public, policymakers, and law enforcement to hold the gun industry accountable for its role in supplying crime guns, bring about needed reforms to ensure that firearms are transferred responsibly, and ultimately save lives.

In 2019, Pennsylvania Attorney General Josh Shapiro launched an Initiative for “investigating how prohibited purchasers obtain firearms and strategically shutting down those pipelines.”

Trace data from participating law enforcement agencies are shared on a website, which shows data of crime gun traces for firearms recovered in Pennsylvania. According to the website, the tool is intended to let you explore gun crimes, gun trafficking, and where guns recovered in crimes came from. The database includes trace data for 186,000 crime guns from over 150 law enforcement agencies in the state.

*The dataset, while extensive, is not comprehensive. It only includes crime guns recovered by Pennsylvania law enforcement agencies that have opted into trace data sharing.

The database shows a number of variables about recovered crime guns, including:

Traces in the database date back to 1977. The most current trace at the time Brady conducted its analysis in August 2021 was from 2020.

Dealers with large numbers of traces should implement stronger business practices. ﻿Legislatures can and should codify requirements, such as those found in Brady's Gun Dealer Code of Conduct, if the industry fails to act voluntarily.

BRADY FINDINGS: WHAT DOES THE PENNSYLVANIA TRACE DATA SHOW?

Focusing only on dealers in the database located in Pennsylvania, we found that 4,318 dealers account for 91,689 traces — about half of the total traces in the database, the rest being traced to unknown or out-of-state dealers. The largest number of traces attributable to a single dealer is 3,652.

As most dealers sell few or no crime guns, zeroing in on the dealers contributing to the crime gun problem allows for efficient and effective enforcement.

50% of crime guns traced based to PA dealers were sold by just 1% of dealers and 90% were traced back to 20% of dealers. 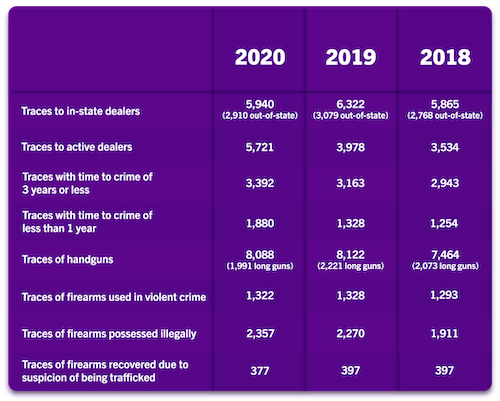 Other key findings include 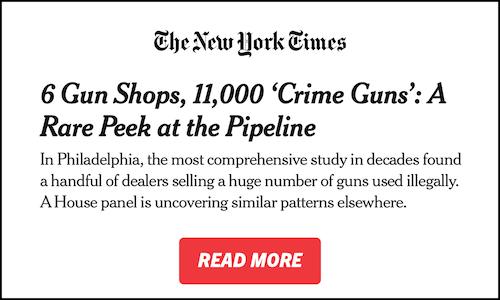