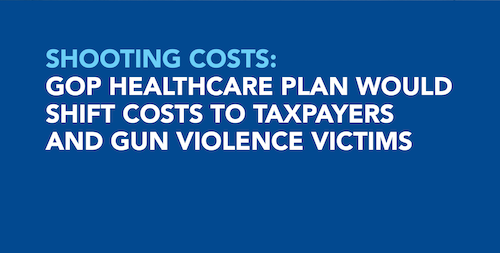 The cost of initial hospitalizations alone for gunshot victims is more than $700 million annually, approximately $24,000-32,000 per patient. For survivors with complications, such as Congressman Steve Scalise, the costs of treatment and recovery are many times that.

In 2017, a mass shooting targeting lawmakers in broad daylight on a baseball field in Alexandria shocked Americans. As the country reeled from news of House Majority Leader Steve Scalise's uncertain prognosis after a gunshot wound to the hip, Congress continued its debate on repealing critical components of the Affordable Care Act (ACA) — a move that would literally mean the difference between life and death for victims of shootings.

An estimated 22 million people were set to lose their insurance under the Republican healthcare plan. The proposal would leave many severely-wounded gunshot victims without the critical treatment necessary for a full recovery — recovery that in many cases costs in the range of hundreds of thousands if not millions of dollars per patient

Initial hospitalizations and follow up care are covered under the ACA through individual insurance coverage, which cannot discriminate based on preexisting conditions, nor increase in cost as a result of such conditions. They are also covered by the Medicaid and Medicare programs, which cover more than 40 percent of the costs associated with initial hospitalizations for gunshot wounds. (Medicaid covered $2.3 billion of the $6.6 billion in costs related to initial hospital stays for gunshot victims from 2006-2014, according to a 2017 study). But an estimated 15 million people will lose Medicaid coverage under the Republican plan.

The epidemic of gun violence should be treated as a public health threat and an issue of concern to all taxpayers — particularly in the context of debates around healthcare legislation. Brady's report offers a window into the struggles of victims to access and afford care before the ACA's protections were in place. The report profiles a couple that amassed $5 million in medical bills after they were shot in a drive-by shooting; a young man wounded by celebratory gunfire when he was 11 whose care has cost well over $15 million; a young boy who was shot in the head at 7 and whose mother lost her job because of her need to care for him; and a teen who uses a wheelchair after he was shot in the back while walking to the grocery store.