Preventing Gun Violence Through The Power of Procurement

State and local executives can — and must — take action to ensure firearm sellers, distributors, and manufacturers adopt safe business practices.

Members of the gun industry are gatekeepers to preventing guns from being diverted into the illegal market and must be held responsible. This can be done through the power of public procurement.

What is public procurement?

Public procurement refers to how a government body purchases goods, services, or works. It is typically up to the executive branch to decide what vendors to work with. These contracts can be a major source of reliable revenue for vendors and are very desirable. These contracts also account for a substantial portion of taxpayers’ money — one out of every three dollars state and local governments spend goes toward purchasing something.

Governments should carry out procurement processes efficiently and with high standards in order to safeguard the public interest.

How can public procurement be used to prevent gun violence?

American law enforcement agencies and their officers purchase a lot of guns. Cities across the U.S. spend more than $5 billion a year on guns alone; ammunition and other supplies cost a few billion more. There are over one million law enforcement guns in the U.S.

The number one purchaser of firearms is taxpayers.

Government agencies and officials that procure firearms should be able to count on their firearm vendors to deal in a way that promotes public safety. Not all federally licensed firearm dealers act responsibly, but many have voluntarily adopted policies that promote public safety. Since state and local executive branches have discretion when it comes to choosing which businesses to work with, it provides an opportunity to promote responsible practices from gun industry businesses vying for contracts.

Click above to read more from The New York Times

States without strong gun safety laws can still promote gun safety by ensuring that taxpayer dollars do not enable gun trafficking and crime. This will also help change irresponsible behaviors that too often enable gun violence.

Learn about a Supply-Side Approach to Preventing Gun Violence

Brady's Combating Crime Guns Initiative works to shift the burden of gun violence from the shooters to the suppliers of crime guns, including irresponsible gun industry actors who prioritize profit over public safety.
Learn More

In September 2019, Governor Phil Murphy signed Executive Order 83 (EO 83), which seeks to ensure that the state of New Jersey is not doing business with the minority of licensed gun dealers that put profit over public safety. 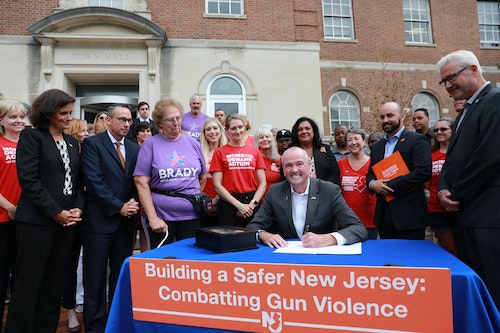 New Jersey spends $70 million annually on firearms and ammunition for its state police and law enforcement agencies. Under EO 83, the state ensures that any bid for guns and/or ammunition requires that each vendor, prior to award, certifies adherence to the state’s listed public safety principles.

As part of this effort, the New Jersey sent requests for information (RFIs) to federally licensed firearm dealers from whom the state procures its firearms, asking them to outline their existing policies that enhance and promote firearm safety. They also sent RFIs to financial institutions doing business with New Jersey asking for any company principles that relate to gun safety or the responsible sale of firearms. 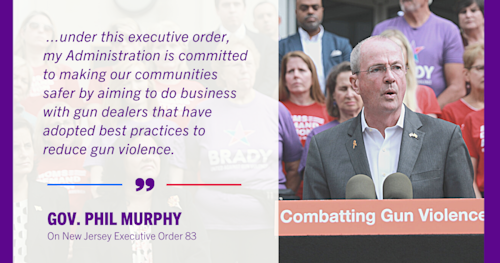 Using New Jersey’s Open Public Records Act, Brady obtained the RFI records received by the state. In these pages, Brady found evidence that EO 83 had both a positive impact in promoting gun safety among gun vendors and financial institutions and that its influence will likely grow.

Responses from federal firearm licensees varied — some indicated that they take gun safety seriously, even going beyond New Jersey’s listed principles. In contrast, at least one gun retailer attacked the RFI and the principles it outlined. Ninety financial institutions also responded to the RFI with the majority indicating that they have relevant policies whether broad or specific to the gun industry. Several institutions provided information on conditions that must be met before engaging with members of the firearm industry and the RFI also persuaded some institutions to implement new policies that promote gun safety.

Read the Report
Preventing Gun Violence Through The Power of Procurement
https://brady-static.s3.amazon...
Back to Reports