Origin of an Insurrection: How Second Amendment Extremism Led to the January 6 Capitol Attack 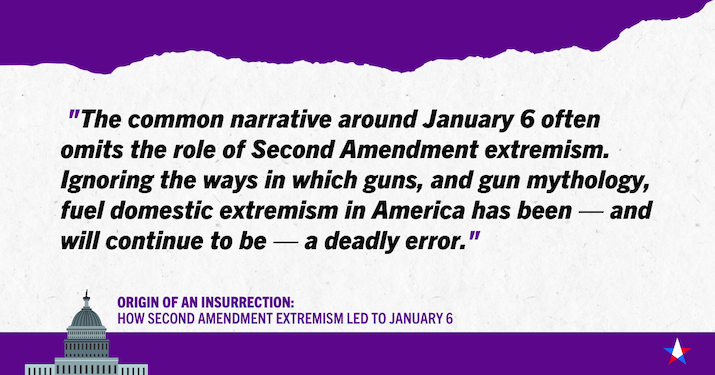 The Capitol insurrection could not have happened without Second Amendment extremism and decades of dangerous gun lobby rhetoric. If our reckoning of that day’s violence does not account for the role of these forces, then we have failed because the forces that gave rise to January 6 are still here.

To think that the January 6 U.S. Capitol attack was an aberration would be a grave mistake. The forces that gave rise to January 6 are still here. In fact, just this week, a Washington Post-University of Maryland poll found that about 1 in 3 Americans believe violence against the government can at times be justified. And as the 2022 midterm elections loom — with the 2024 presidential election not far ahead — some polls suggest a majority of Republican voters still falsely believe the 2020 election was stolen.

Encouraged by insurrectionist gun lobby rhetoric, government officials at all levels, from local School Boards to Congress, have faced increasing threats from disgruntled constituents who view valid public safety and national security measures as “tyranny.” We must heed the warning of January 6 and take action to stem future violence — beginning with renouncing Second Amendment extremism and addressing its many contributions to the nation’s epidemic of gun violence.

What is Second Amendment Extremism?

Second Amendment extremism arises from what’s commonly known as the “insurrectionist” construction of the Second Amendment: a false interpretation fomented by extremists, marketed by the gun lobby, and adopted by some mainstream politicians, including the 45th President of the United States. Second Amendment extremism lays the foundation for much domestic unrest and weaponized terror throughout American history, including but not limited to the 1995 Oklahoma City Bombing, recent armed agitation at the Michigan State Capitol, and the January 6 attack.

Indeed, investigations and firsthand accounts of January 6 show that many of its agitators were armed, ready, and willing to harm lawmakers. Accordingly, officers on duty at the U.S. Capitol that day had credible reasons to fear that many rioters were armed; a number of these officers have since testified before Congress that those fears hindered their ability to control the insurrectionist mob.

The Dangerous Ties Between Second Amendment Extremism and White Supremacy

The insurrectionist Second Amendment framing is not an equal opportunity ideology. It implicitly — and often explicitly — assumes that white people, specifically white men, will be the ones wielding arms. In this way, Second Amendment extremism, like January 6, is inseparable from white supremacist ideology. It should therefore be no surprise that white supremacy is foundational to the Capitol attack; history shows that domestic extremism fueled by white supremacy has a violent track record.

The Washington Post and Center for Strategic and International Studies recently reported that incidents of “domestic terror” have surged to levels not seen since the militia-movement era of the 90s. According to the Anti-Defamation League (ADL), white supremacists remained the most lethal group in 2020, taking responsiblity for 58% of extremist-related murders over the past decade. Following the January 6 attack, Trump-appointed FBI Director Christopher Wray warned “Jan. 6 was not an isolated event. The problem of domestic terrorism has been metastasizing across the country for a long time now and it’s not going away anytime soon.

With NYSRPA v. Bruen, the Supreme Court Has the Potential to Make Second Amendment Extremism the Law of the Land

On November 3, 2021, the Court heard arguments in New York State Rifle & Pistol Association Inc. (NYSRPA) v. Bruen, which centers on the scope of the Second Amendment outside the home. The NRA and its allies are using this lawsuit to push for a radical reinterpretation of the Second Amendment — one that would allow more guns into more public spaces and put even the most basic gun safety laws at risk of being repealed. As Brady Chief Counsel Jon Lowy explains in the New York University Law Review, this misguided revisioning of the Second Amendment would put all Americans at greater risk of gun violence.

If the Supreme Court decides in NYSRPA’s favor, then suddenly thousands of reasonable concealed carry laws across the country, including laws like the one that enabled D.C. police to make “constant” gun arrests in the days leading up to January 6, would be invalid. Second, the Court could empower the insurrectionist Second Amendment interpretation through a non-binding statement known as “dicta.” Technically, dicta is not law, but lower courts nonetheless look to it for guidance — and considering that lower courts handle the majority of the nation’s legal questions, dicta can have a powerful impact on the legal landscape. NYSRPA v. Bruen thus presents an opportunity for the Court to seemingly bless the gun lobby’s insurrectionist view.

The dangerous, growing mix of Second Amendment extremism, lax gun laws, and an emboldened white supremacist movement will continue to threaten our democracy and public safety unless our elected officials take action.

As January 6 showed, strong gun laws work ― but we still have far to go. It is urgent that our leaders: 1) pass state and federal gun violence prevention laws; 2) support a reasonable construction of the Second Amendment; and 3) direct the Bureau of Alcohol, Tobacco, Firearms and Explosives (ATF) to crack down on the criminal gun market.

That is why Congress should do the following:

One in five guns is sold without a background check. It is crucial that Congress pass univesral background checks. This sensible measure, which is supported by the majority of Americans, would create a stronger barrier to anyone planning to commit domestic terror with a firearm.
Take action

Extreme risk laws empower family members, concerned citizens, or law enforcement to temporarily separate individuals from firearms if they exhibit clear signs that they will hurt themselves or others. Congress can bolster these policies, which are proven to save lives.
Take action

The Hate Crime Prevention Act, also called the Disarm Hate Act, prohibits the sale of firearms to individuals convicted of assaulting someone based on their race, religion, gender, sexual orientation, gender identity, or disability.
Take action
Back to Reports