A supply-side approach is focused on the supply of crime guns and encourages elected officials, community members, and law enforcement to address not just ‘the shooter’, but also the source of the gun. By using a behavior change approach that holds accountable the guns dealers, in addition to existing intervention and prevention efforts, local communities could experience a reduction in homicide and shooting rates in even the most impacted neighborhoods.

In other words, a supply-side strategy is a critical aspect of a comprehensive public health approach to reducing gun violence.

80% of news articles about community gun violence focus on the shooter and the shooter’s interaction with the criminal justice system, obscuring the fact that gun violence is the result of both demand and supply. One analysis of gun violence reporting over the course of a year across 41 newspapers in California found zero mentions of the gun industry.

THE NEED FOR ACTION

IN THE ABSENCE OF ADEQUATE FEDERAL OVERSIGHT, STATE AND LOCAL OFFICIALS MUST ACT

According to the most recently available data, the retail gun dealers responsible for selling the majority of crime guns are a fraction of the total gun industry: about 90% of guns recovered by law enforcement are traced back to just five percent of licensed firearms dealers. Gun tracing enables law enforcement to identify the gun dealers with poor business practices responsible for diverting guns from the regulated market to the criminal market.

However, the federal government’s oversight of these dealers is limited. From October 2016 to October 2017, federal agents inspected only 11,000 of the more than 130,000 federal firearms licensees (“FFLs”) in the United States — and cited over half the inspected FFLs for violations — yet revoked the licenses of less than one percent of them.

The key takeaway: The federal government does not adequately ensure that the country’s hundreds of thousands of FFLs sell guns lawfully and appropriately. Significant progress against gun trafficking and gun crime will be made only if local and state officials take action.

Brady is proud to release “Combating Crime Guns: A Supply-Side Approach,” a report that is intended to help state and local elected officials better understand:

This report can also be used by members of the community as a guide to hold their elected officials responsible for enacting a comprehensive supply-side approach.

THE ROLE OF STRAW PURCHASERS

A supply-side approach of stronger enforcement of dealer regulations and better training of gun shop employees is likely to change gun supplier behavior, which would result in fewer gun sales to gun traffickers and straw purchasers. Straw purchasers are those who buy guns on behalf of others who cannot legally do so themselves.

There is no federal crime of straw purchasing; federal law makes straw purchases illegal only because of the purchaser’s and dealer’s obligations to not make or retain false statements about material facts on the form that must be filled out when a firearm is purchased from a licensed dealer.

UNDERSTANDING THE FLOW OF CRIME GUNS

When a firearm is either found at a crime scene, associated with a crime scene, or associated with a suspect, law enforcement agencies have the ability to trace that firearm and follow the path from legal manufacture or importation to the wholesaler, the distributor, a federally licensed firearms dealer, and finally, to the firearm’s first retail purchaser. However, at any point in this firearm commerce flow from manufacturer/importer to a retail firearm purchase, firearms can be diverted from the legal commerce flow towards the illegal firearm market: 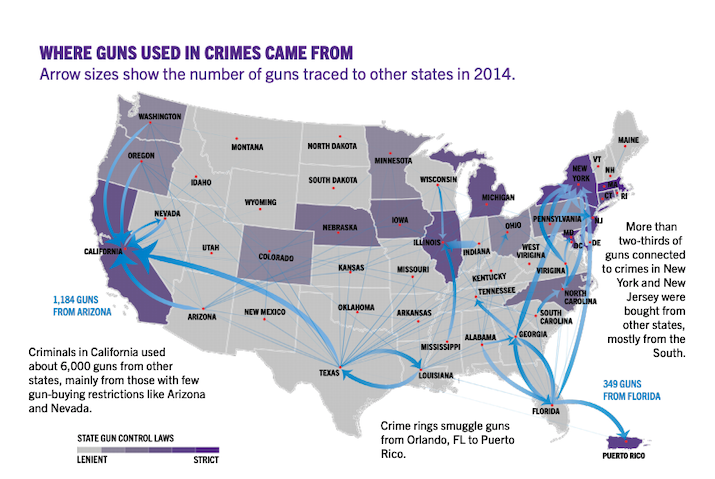 In states where local regulations have not been preempted by state law, localities may have an opportunity to enact significant regulations on dealers operating in their communities. This report offers many examples of effective supply-side state and local laws, policies, and regulations that could be adopted in other jurisdictions.

In states with strong firearm preemption laws, municipalities may not be able to enact new policies to regulate gun dealers. However, local officials can analyze existing local regulations for ways to hold dealers more accountable, which may include:

As major purchasers of firearms and ammunition, local governments can also use the power of the purse to incentivize better industry business practices by:

In addition, local officials should share information about the business practices of gun dealers in their jurisdictions. Because communication and transparency are key to disrupting illegal gun supply chains, law enforcement agencies should:

This report was written to assist state and local officials in their efforts to prevent gun violence using supply-side strategies. In the report, you will also find sections including:

For more information about any of the strategies examined in this report, or assistance enacting these policies, please contact Brady.