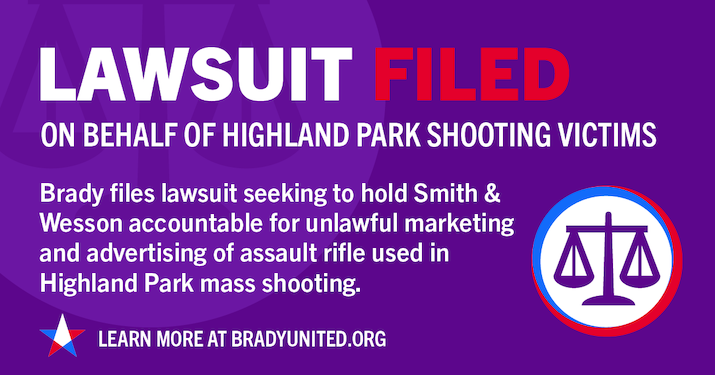 The lawsuit seeks to hold Smith & Wesson liable for unlawful marketing and advertising of its M&P 15 assault rifle — the rifle used by the gunman who opened fire at Highland Park’s Independence Day Parade. The complaint alleges that Smith & Wesson's marketing campaigns specifically targeted adolescents, who are drawn to the risk-taking associated with militaristic weapons and combat missions.

The plaintiff is Elizabeth (Liz) Turnipseed, who was shot while standing along the Highland Park Independence Day Parade route with her three-year-old daughter and husband. According to medical reports, the bullet entered and exited her body. As a result of the shooting, Turnipseed sustained permanent and life-changing injuries that will require lifelong medical treatment.

The complaint seeks to hold Smith & Wesson liable for unlawful marketing and advertising of its M&P 15 assault rifle — the rifle used by the gunman who opened fire at Highland Park’s Independence Day Parade, murdering seven people and leaving 48 other civilians injured in a matter of only 60 seconds. The complaint alleges that Smith & Wesson's marketing campaigns specifically targeted adolescents, who are drawn to the risk-taking associated with militaristic weapons and combat missions, such as young players of violent first-person shooter video games like Call of Duty, which prominently features variants of the weapons designed and manufactured by Smith & Wesson. The Smith & Wesson M&P 15 is the same weapon that was used by the attackers in San Bernardino, Parkland, Aurora, and Poway.

“You don’t expect to go to your child’s first parade and leave with something other than happy memories, but instead, I left with shrapnel permanently lodged in my body. This lawsuit will hopefully keep other families and other communities from suffering the same way that we and the Highland Park community have suffered,” said Liz Turnipseed.

Edelson partner Ari Scharg, who is a Highland Park resident and was at the parade with his wife and young children, adds, “The Highland Park community has rallied together and is emerging from the shooting stronger than ever. Liz and the other victims now have a historic opportunity to hold one of the most powerful and profitable gun companies accountable for inspiring generations of mass shooters. We have all the energy in the world for this fight.”

Erin Davis, Senior Counsel for Trial and Appellate Litigation at Brady, states, “These plaintiffs are seeking to stop the irresponsible and unlawful sale and marketing of weapons of war like the ones used in the Highland Park attack. We hope this lawsuit will prevent future tragedies, save more families from pain, and keep our communities safe.”

Brady has represented victims of the gun industry for over 30 years and has won over $60 million in settlements and verdicts brought by Brady for victims and survivors. Brady has also won landmark precedents, holding that gun companies can be held legally responsible for damages caused by their irresponsible business practices and has forced gun dealers and manufacturers to reform their business practices.

Edelson PC is one of the nation’s leading high-stakes plaintiffs’ firms, focusing on class and mass actions to public client investigations and prosecutions. Over the years, Edelson has earned a national reputation for its creativity and bold take on practicing law, all while taking on cases that are viewed as “unwinnable.” As a result of the firm’s innovative approach, Edelson has helped secure over $45 billion in settlements and verdicts on behalf of classes, individuals, and governmental entities.