Victims of 2019 Mass Shooting in Dayton, Ohio, File First-Of-Its-Kind Lawsuit Against Manufacturer of High-Capacity Magazine Used in the Shooting 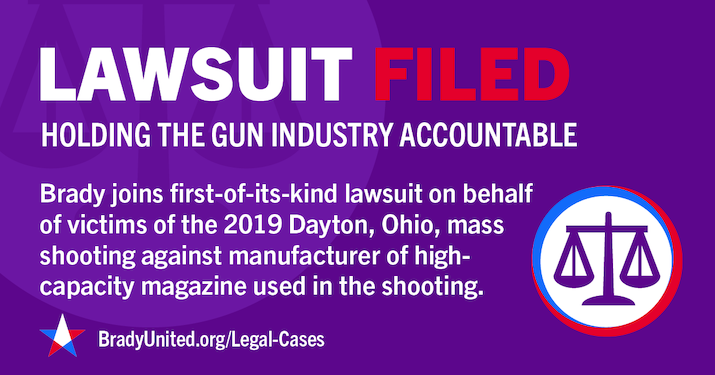 This is the first lawsuit of its kind to solely on the dangers presented by the indiscriminate manufacture and sale of a high-capacity magazine. This weapon enabled a gunman to senselessly murder nine people and wound 17 others in the 2019 mass shooting in Dayton, OH.

“We believe this lawsuit is the first to focus solely on the dangers presented by the indiscriminate manufacture and sale of a large-capacity magazine. These are instruments of terror that have been used over and over to turn everywhere from shopping centers to churches to elementary schools into war zones. Two years ago in Dayton, OH, a 100-round ammunition magazine enabled a shooter to turn a popular entertainment district into a battle scene that killed nine people and wounded 17 others. We are bringing this suit on behalf of victims and survivors in hopes to prevent another tragedy like Dayton. We look forward to proving our case in court.”

"It’s been two years, but the victims' families and the survivors continue to experience unimaginable grief. They have come together to fight for change. By filing this lawsuit, they are taking the necessary steps to eliminate the sale of 100-round ammunition magazines, and we are honored to help them. It only took 30 seconds for the shooter to kill nine people and wound 17 others, and that’s because he had a 100-round magazine. No civilian needs a 100-round magazine. It's time for the manufacturers to be held accountable for their participation in these horrific events."

“Claggett & Sykes is honored to be able to represent the families of those who senselessly and tragically lost their lives in the mass shooting on August 4, 2019 in Dayton. For years now, America has been tormented by an epidemic of mass shootings enabled by companies like KCI that produce gun accessories with one purpose: taking lives. We believe this lawsuit can bring about change and help prevent gunmen from obtaining military style high capacity magazines like the one used in the Dayton shooting. No family should have to suffer and grieve like these families have. Our hope is that this lawsuit will help prevent future tragedies by holding KCI accountable for its careless and reckless conduct.”

“I am proud to represent these brave families in their quest for justice. They, like most Americans, advocate only common sense gun laws. Their hope and prayer in filing this lawsuit is that no other family will have to experience the grief and loss they have suffered and will live with forever.”

About the Legal Case:

Filed in Clark County, Nevada, where KCI USA is located, the suit alleges negligence, negligent entrustment, and public nuisance by KCI USA in relation to the 2019 mass shooting. The suit alleges that KCI USA has no meaningful protocols, checks, or oversight in place to ensure that its product isn’t used in a mass shooting. It was foreseeable that, without sufficient safeguards, providing 100-round magazines to the general public would likely result in them being used in a mass shooting.

In the early hours of August 4, 2019, a gunman opened fire in the Oregon District of Dayton, OH, outside of a crowded bar. The gunman fired 41 rounds in less than 30 seconds, killing nine people and injuring 17 others. The shooter was armed with a semi-automatic firearm equipped with a 100-round drum magazine manufactured by Kyung Chang Industry USA, Inc. (KCI USA). An additional 10 people were treated for injuries following the shooting, bringing the total injury count to 27. The shooting occurred less than 24 hours after a gunman opened fire in a Walmart in El Paso, TX, and a week after a mass shooting at the Gilroy Garlic Festival in Gilroy, CA.