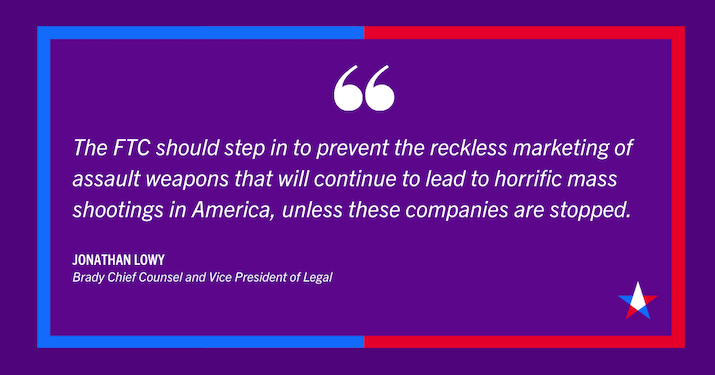 NEW YORK — Everytown for Gun Safety and Brady, two national gun violence prevention organizations, along with Fred Guttenberg, whose daughter was killed in the 2018 Parkland shooting, have renewed and expanded their call on the Federal Trade Commission to investigate Smith & Wesson’s marketing practices. Today’s letter to the FTC highlights a new example of the dangers of Smith & Wesson’s marketing of its M&P line of assault rifles – specifically, Kyle Rittenhouse’s use of a Smith & Wesson M&P assault rifle to kill two people and injure a third people during a protest for racial justice in Kenosha, Wisconsin. The letter additionally highlights a pattern by Smith & Wesson of engaging social media influencers who do not adequately disclose their connections to the company, including the receipt of free firearms, trips, and athletic sponsorships from Smith & Wesson, in violation of FTC guidelines.

The letter follows up on the advocates’ prior complaint to the Commission which cited substantial evidence that Smith & Wesson uses unfair and deceptive practices to market its M&P line of rifles to young, male consumers as associated with the U.S. military. Young, male consumers are a demographic that includes a disproportionate number of the shooters in the 10 most destructive mass shootings since January 2009. The evidence indicates that Smith & Wesson exploits the known attraction of this demographic to the excitement, risk, and aggression associated with the military and law enforcement. Since the original letter was sent, an M&P assault rifle was also allegedly used by a 17-year-old to kill two men and injure one other at the Kenosha, Wisconsin racial justice protest after the police shooting of Jacob Blake.

Arguing that such practices are dangerous and unfair and deceptive under federal law, today’s letter urged the FTC to investigate.

“Too many families have experienced tragedy like mine because of weapons like Smith & Wesson’s M&P rifles. Gun manufacturers have a responsibility to prevent these tragedies, but Smith & Wesson’s deceptive marketing practices demonstrate that they will not act responsibly. Today, I am asking the FTC to ensure that Smith & Wesson act like a responsible member of our society and follow the same rules and standards as other companies.”

Fred Guttenberg, whose daughter Jaime Guttenberg was killed in the 2018 mass shooting in Parkland, Florida

“It need not take yet another horrific shooting for regulators to take this dangerous marketing seriously. The FTC can and should act immediately. It is no coincidence that Smith & Wesson’s M&P rifles have been used in combat-like assaults by teenagers repeatedly in recent years — from Parkland, Florida, to Poway, California, to Kenosha, Wisconsin — and this pattern deserves prompt attention and action.”

“Companies should not be allowed to irresponsibly market weapons of war to the general public, to profit off sales to dangerous people who foreseeably engage in mass assaults on high schools, work places, places of worship, and virtually every place where Americans gather to enjoy life. The FTC should step in to prevent the reckless marketing of assault weapons, that will continue to lead to horrific mass shootings in America, unless these companies are stopped. The FTC must act immediately to address this clear and dangerous situation.”

As detailed starting on page 10 of this week’s letter, Everytown and Brady have also found that Smith & Wesson appears to market its firearms through the deceptive use of social media influencers, in violation of the Commission’s Endorsement Guides.

Smith & Wesson’s endorsers frequently promote the company’s firearms through a variety of platforms, such as video product reviews, social media posts, and real-world product demonstrations. It appears, however, that the endorsers fail to adequately disclose when they have a material connection to Smith & Wesson, including receiving free firearms, trips, and athletic sponsorships.

These marketing practices are likely to mislead reasonable consumers into believing that the endorsements reflect an independent opinion when in reality the endorsers have a material connection to Smith & Wesson. The complaint and last week’s letter call on the FTC to investigate Smith & Wesson’s marketing practices, including its use of social media influencers, and consider ordering the Massachusetts-based firearms manufacturer to:

ICYMI: @bradybuzz is joining @Everytown and @fred_guttenberg in reiterating our call for @FTC to hold Smith & Wesson accountable for dangerously marketing their assault rifles — like the one used to kill 2 people in #Kenosha exactly one year ago today.https://t.co/XC8NnK66pC

Since 1989, Brady’s legal team, along with Brady’s pro bono alliance, has dedicated its expertise to help drive gun violence reform and end America’s gun violence epidemic. Brady has represented victims, survivors and communities in impact litigation aimed at reducing gun violence, winning numerous precedent-setting victories in courts across the country, and verdicts and settlements totalling over $60 million dollars. A California trial judge recently allowed a Brady lawsuit to proceed which alleges that Smith & Wesson’s marketing and design of an assault weapon helped cause a mass shooting at the Poway synagogue outside San Diego. More information on Brady Legal at www.bradyunited.org/our-work/brady-legal.

Everytown Law, the litigation arm of Everytown for Gun Safety Support Fund, is the largest team of litigators in the U.S. working full-time on advancing gun violence prevention in the courts. Everytown Law fights for the right of all individuals to live free from gun violence, including representing cities seeking to advance gun safety through local action and litigation, challenging dangerous gun laws, defending gun safety laws against Second Amendment and preemption challenges, and representing survivors of gun violence seeking accountability and reform from the gun industry. Learn more about Everytown Law at www.everytownlaw.org.

Everytown for Gun Safety Support Fund (the “Everytown Support Fund”) is the education, research and litigation arm of Everytown for Gun Safety, the largest gun violence prevention organization in the country with nearly six million supporters. The Everytown Support Fund seeks to improve our understanding of the causes of gun violence and help to reduce it by conducting groundbreaking original research, developing evidence-based policies, communicating this knowledge to the American public, and advancing gun safety and gun violence prevention in communities and the courts. Learn more at www.everytownsupportfund.org.