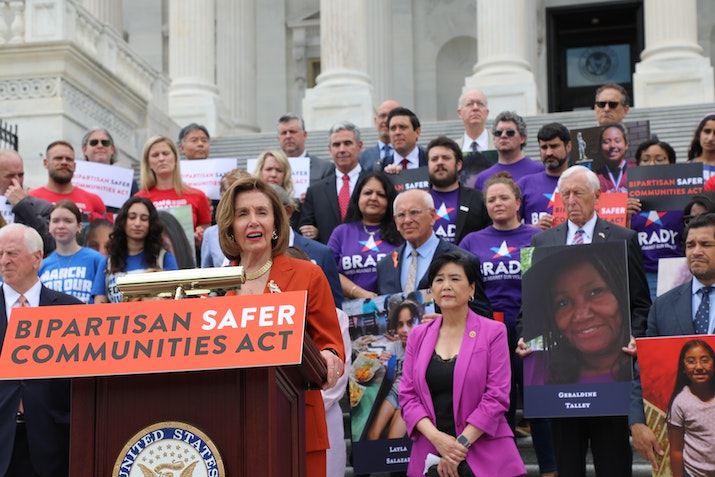 “This is a watershed moment for gun violence prevention and for the nation, and one that would not be possible if not for the decades of action from activists and organizers, particularly Black and Brown activists, and the millions of voters who elected gun violence prevention majorities to both chambers of Congress. The fact that 65 Senators and 234 members of the House of Representatives voted in bipartisan fashion for this bill demonstrates that the cries of the American people have not fallen on deaf ears and that elected officials will put the lives and interests of voters over blood-soaked dollars from the NRA and gun industry. Gun violence prevention reforms are bipartisan because they are common-sense solutions that will save lives. Congress has finally caught up to the majority of Americans and to popular opinion.

While this bill is not perfect, it takes a comprehensive approach and is a significant and a meaningful step forward. It will fund critical programs to prevent gun violence and support communities while expanding and strengthening background checks and critically addressing the deadly ‘boyfriend loophole.’ Particularly in light of the Supreme Court’s wrong and damaging decision in the Bruen case, these policies are more important than ever.

Brady thanks the House leadership for speedily taking up this important bill and Senators Cornyn, Sinema, and Tillis for working cooperatively and steadily to reach this important goal. Brady also particularly and especially thanks Senator Chris Murphy who has led this effort and this bill to this moment. His leadership will save Americans for years to come.”

About the Bipartisan Safer Communities Act

The text of this legislation builds out the policy areas agreed to in the bipartisan framework announced on June 12, 2022. Significantly, this legislation will address the so-called “boyfriend loophole,” a current gap in federal law which permits some individuals subject to domestic violence restraining orders or who are convicted of domestic violence abuses to legally purchase or possess a firearm. The bill likewise creates new requirements for federal firearm licensee designation, and a mechanism to ensure that individuals who exhibited signs of dangerousness as minors are appropriately evaluated when seeking to purchase a firearm. The bill also creates new federal standards for straw purchases and trafficking firearms, including maximum penalty standards that Brady does not support and warns could create unintended harm, particularly against Black and Brown communities. Finally, the bill includes new funds available to states to support extreme risk protection laws and crisis prevention programs, and funds for both mental health resources and school safety programs.

We are proud to stand by @SpeakerPelosi and gun safety champions @RepLucyMcBath, @RepThompson, @RepRobinKelly, @RepEscobar and @RepJudyChu as the House sends the Bipartisan Safer Communities Act to @POTUS's desk.

This legislation will save countless lives. pic.twitter.com/LQALcyncLn