“President Trump’s Threat to Public Safety Must End:” Brady Calls for Invocation of 25th Amendment and For State Legislatures, Congress to Safeguard Against Violent Extremism

it is clear that the 117th Congress’ first order of business must be strengthening our nation’s gun safety laws to protect all our citizens from the threat of violence and extremism.

Washington, D.C., January 7, 2021 – President Trump’s words and actions have threatened the public safety of all Americans and materially damaged our country, even as the violence in Washington incited by President Trump could have been far worse but for the city’s common-sense gun laws. While the Capitol was violently sieged by extremists draped in symbols of hate and white supremacy yesterday, other state capitals were threatened by armed protestors. The President directly incited violence in D.C., while his actions over the past four years have fostered extremism across the country. Yesterday’s events were the logical terminus of his many years of lies and hate.

We at @bradybuzz call for the immediate removal of President Trump from office.

It is deeply unfortunate and a sad state of affairs for America and our democracy that it has come to this.

But we must put Americans' lives and public safety first. #25thAmendmentNow https://t.co/nJli2Q5YlD

To remedy this immediate and pressing danger to our democracy, Brady joins with leaders across this country, responsible citizens, and concerned activists in calling on the Vice President and Cabinet to immediately invoke the 25th Amendment and remove President Trump from office.

“We are living through a dark time in U.S. history, fueled by division inspired by a President of the United States who spreads lies and is enabled by other leaders who continue to spread them. The 25th Amendment was adopted for just such an occasion, to safeguard our Republic from the uncertainty and chaos created by an incapacitated or unfit President. This solemn and immediate remedy is necessary at this moment, President Trump must be removed from office to stop his damage to our country and to preserve public safety. The violent insurrection the President fomented yesterday could have been far more deadly and destructive were it not for Washington, D.C.’s common-sense gun laws. President Trump has shown that he will not stop inciting unrest and his continued actions and presence are a threat to citizens and state governments around the country with less comprehensive public safety laws.

Our President has proven himself unfit by undermining our democracy and attacking our very government. He has violated his oath to uphold and defend the constitution. His cabinet and Vice President Pence must now uphold their oaths to this country and invoke this solemn process to remove President Trump for the remainder of his term. This is a dark moment in our nation’s history, but we must not permit President Trump’s repeated denigration of the rule of law to go unpenalized. We cannot set a precedent that these undemocratic acts are acceptable. They are not. For the safety of our country and its current and future leaders, President Trump must be removed from office.

Yesterday’s violence in Washington was an act of domestic terror. D.C.’s strong gun laws, which prevent open carry, and only permit concealed carry with a license, clearly prevented individuals who breached our capital from openly carrying guns. If that had happened, it is inevitable that many more lives would have been at risk. Unfortunately, most states across the country do not have similar protections, and we already know more activity like what we saw in D.C. is planned. These dangers do not have to be imagined. Given these events, states must immediately take steps to safeguard the rule of law and their legislatures while law enforcement in D.C. must safeguard the upcoming inauguration from threats of violence and extremism.

In the same way, it is clear that the 117th Congress’ first order of business must be strengthening our nation’s gun safety laws to protect all our citizens from the threat of violence and extremism.” 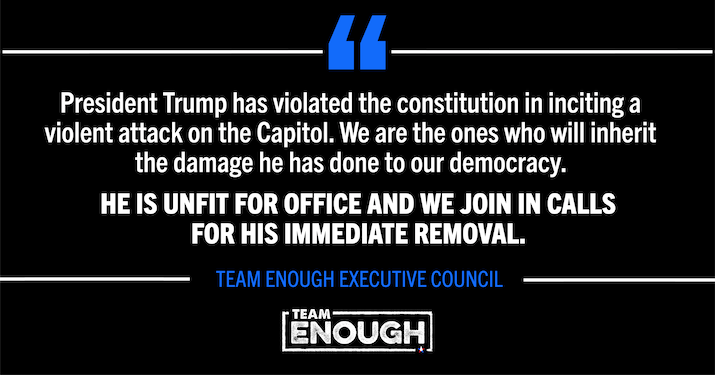 "As a movement of young people who mobilize and fight for the issues we care about most, we understand that the principles of our democracy and its integrity are sacred. These institutions and values are essential in our work to create change and a more just and equitable country.

President Trump has undermined the rule of law and violated the constitution in fomenting and inciting a violent attack on the Capitol yesterday. He has shown that he is unfit for office, as his actions over the past four years culminated in the dangerous assault on the Capitol yesterday. Our generation will inherit the damage that President Trump has done to the country. We ask that our current leaders act to prevent further damage. President Trump has damaged our democracy. The Team ENOUGH Executive Council joins in calls for his immediate removal. The Vice President and Cabinet must invoke the 25th Amendment at once.”