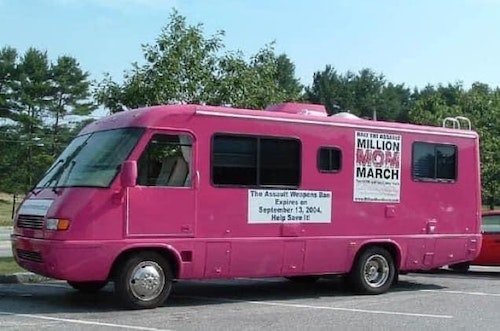 the Big Pink Rig used by the Million Mom March to promote the preservation of the 1994 assault weapons ban, which lapsed in 2004. Image provided via Donna Dees-Thomases.

In 1994, then-President Bill Clinton signed the Public Safety and Recreational Firearms Use Protection Act, commonly called the Federal Assault Weapons Ban, which banned 19 assault weapons (and their copies) as well as other semi-automatic firearms with two or more specified features. That federal ban, however, expired on September 13, 2004.

When it expired, assault weapons and high-capacity magazines were suddenly legalized, unless banned by state or local laws. Activists in 2004 fought tirelessly to try to keep the ban in place — and they haven't stopped yet. Two of those original organizers — Donna Dees-Thomases, founder of the Million Mom March and Shikha Hamilton, Vice President of Organizing at Brady, joined hosts Kelly and JJ to detail what it was like when the ban first lapsed, why the fight for a new assault weapons ban has continued, and how our listeners can join the fight.