What is the National Instant Criminal Background Check System?

The National Instant Criminal Background Check System (NICS) is the federal system that checks available records to determine if a prospective firearm purchaser is legally permitted to receive a firearm. This system, which was created by the Brady Bill, is essential for keeping guns out of the hands of individuals who should not possess them and is a vital tool for Federal Firearms Licensees (FFLs) to ensure that gun sales are legal. NICS is operated by the Federal Bureau of Investigations (FBI) and tracks data related to each Brady Background Check initiated. Since it was established in 1998, there have been more than 300 million Brady Background Checks initiated through the system. The Brady Background Check system has blocked approximately four million prohibited purchasers from obtaining a firearm. 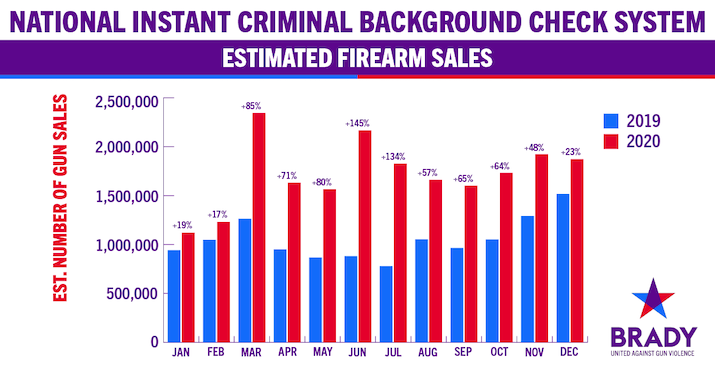 NICS tracks Brady Background Checks that are initiated, but that does not equate to a sale. It also does not account for every transfer, as private sales, like those at gun shows, are not all subject to Brady Background Checks. Additionally, background checks are also initiated for actions other than the sale of a weapon, such as for permit and license applications. However, multiple firearms can be purchased with a single NICS transaction, further clouding the overall number of firearms purchased in a given year.

When a NICS check is initiated, it will return one of three possible responses to a FFL -- proceed, delayed, or denied. About 90% of determinations are made instantly, within mere minutes of initiating a background check. If the Brady Background Check does not show that the purchaser has prohibiting background information, such as a felony conviction, the sale can move forward. However, in some cases, records in the system are unclear, and the FBI needs more time to research the buyer’s eligibility to purchase a firearm. In these situations, federal law allows the FFL to move forward with the sale after three business days have elapsed. These background checks would be counted in NICS records, but also may not necessarily result in a sale.

How and Why We Use NICS Data?

While the number of Brady Background Checks initiated through NICS is not equivalent to the number of guns sold, it does provide insight into US firearm sales. NICS data is available by month, year, state, and transaction type (such as for permits or types of firearm) and reflects trends related to gun sales. We have seen surges in background checks during periods of uncertainty, like for example,the coronavirus pandemic, or after high profile mass shootings — such as the 2012 shooting at Sandy Hook Elementary School Shooting — out of fear of increased regulations, as well as leading up to presidential elections. But Brady has been able to confirm that these surges in background checks tend to correlate with increases in gun sales. Using methods similar to those used byThe New York Times, the Small Arms Survey, and National Rifle Association, Brady uses specific data sets included in NICS’ monthly reports to generate estimates of gun sales for a given period.

How does Brady Determine Gun Sales from NICS Data?

NICS data includes category breakdowns. The categories of firearms are defined by the Bureau of Alcohol, Tobacco, Firearms and Explosives (ATF) as follows:

Brady calculates gun sales estimates by adding together the number of checks listed under “handgun,” “long gun,” “multiple-gun,” and “other.” The number of “multiple-gun” checks is multiplied by two in the calculation, as each “multiple-gun” check represents at least two impending firearm purchases. This methodology excludes additional categories, including “permit,” “permit recheck,” and “pawn shop redemption.”

Importantly, this data only reflects gun sales where background checks are initiated. Many private sales occur without any background check and these are not included in the NICS data. Additionally, some background checks result in a denial, meaning that the transfer to the prospective purchaser cannot legally proceed.

To calculate percent increases in gun sales per capita, Brady uses U.S. Census data from the last day of each month to determine the size of the U.S. population. 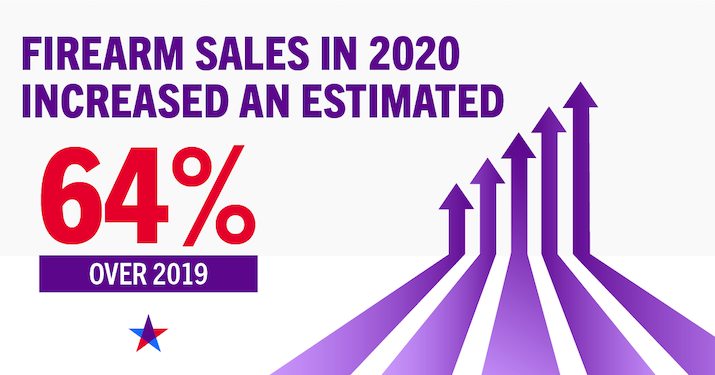 Why NICS Data is Important

Brady utilizes data-driven approaches to prevent gun violence. As we saw during the coronavirus pandemic, surges in gun sales can overwhelm the federal and state-level background check systems. For us to best assist FFLs and help ensure that gun sales are safe, we need clarity into what is actually occurring. We know, too, that many of these surges in purchases correlate with an increase in gun violence, including unintentional shootings. Similarly, studies show that gun ownership is associated with a much higher risk of death by suicide. Each of these real consequences is connected to the availability and prevalence of guns in our homes and communities. Brady is committed to preventing gun violence in all of its forms. To achieve that goal, it is necessary to see the full picture of what is going on in our nation. 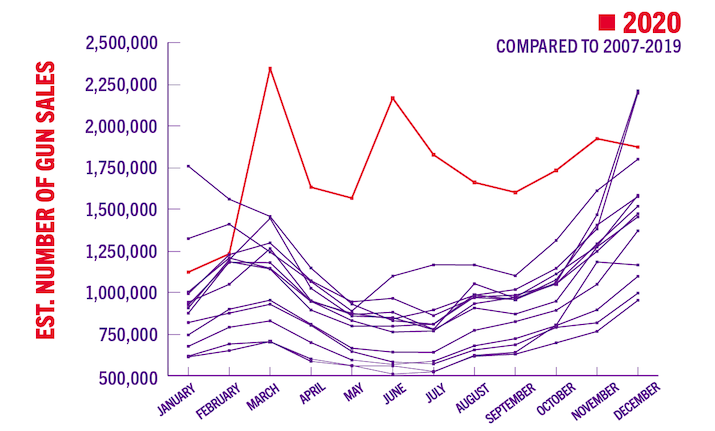