Rep. John Lewis Will Always Be My Hero 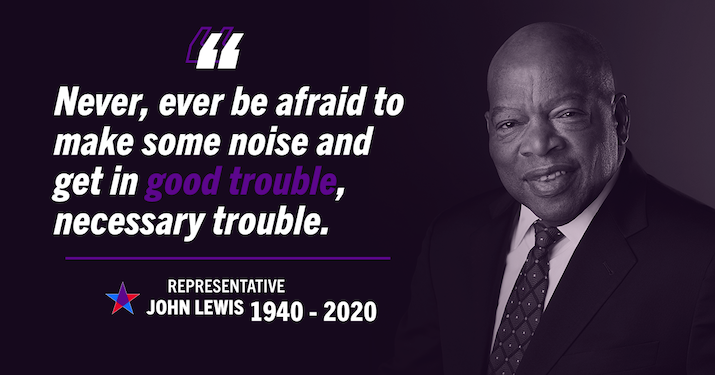 I have been thinking a lot lately about my friend Fred Guttenberg’s memoir, Find the Helpers. And in thinking deeply about that over the last few weeks, I can think of no one who better fits the description of a “helper” than the late, great John Lewis.

Has there ever been a greater helper to the cause of equality, freedom or justice than Rep. John Lewis? Lewis was a civil rights icon, an original and last surviving Freedom Rider, and the youngest speaker at the March on Washington. When the rest of the world formulates their picture of America, I hope that John Lewis is center stage.

My heart is broken at the news that John Lewis has died. He was an American hero in every possible sense. For decades, he has been the beating heart of our country’s struggle against injustice.

May he rest in power, and may we each promise to “make good trouble” in his honor. pic.twitter.com/lFTVO0nI7A

It is not just that Rep. Lewis was a lifelong champion of these causes, tirelessly advocating for change. It is that he advocated in a way that inspired so many of us, with a fierce conviction that was coupled with incredible tenderness and compassion for his fellow citizens. His love for this country was limitless, and he relentlessly fought to make it live up to its promise.

It was an inspiration to us all in 2016 when he led a sit-in on the House floor after Congress failed to enact gun reform in the wake of the Sandy Hook massacre. He taught us that we can never give up, that our voice is our power, and that we are stronger together.

Last year, I was lucky enough to join activists and survivors of gun violence, young and old, to walk with Rep. Lewis, along with Reps. Robin Kelly and Lucy McBath to Mitch McConnell’s office and demand that he schedule a vote on expanded background checks. It was a surreal moment to march down the hall of the U.S. Capitol with Rep. Lewis, this giant who had done so much for our country, and witness his quiet, steely determination for our cause.

We did not get a meeting with McConnell that day — which is really unthinkable knowing that John Lewis took time to ask for one in person. But I got to spend time with him and talk to him, and observed him speaking to so many activists, young and old, encouraging them, shaking their hands and telling them to lift up their voices, that their activism matters, that they have the power to make this world better. And this man who stood for so much and had accomplished so much for equality and justice believed in them and believed in our cause. This made all of us feel inspired to do more, to be better, to work harder, to never give up. On that day, for those of us with him, who watched and observed him, spoke to him, stood in his presence, it was unforgettable and the essence of what it means to make “good trouble.”

We had one simple ask: Bring lifesaving gun legislation to a vote! #EndGunViolence https://t.co/jqA2VQFsU4

This weekend, the news of Rep. Lewis’s passing felt like a gut-punch. It was a hot, hazy, humid weekend in D.C., but I felt called to Black Lives Matter Plaza as the best place to reflect on Rep. Lewis and his life. Peering at the pictures mounted to the fencing that separates the Plaza from the White House, I saw countless smiling faces of men and women, boys and girls, staring at me with hope and expectation. Some were recent pictures, but others went back to the 1970s and had been carefully posted to the fence.

All of these people, all Black victims of violence, had a life and a story that was denied them by violence, often by police violence and often gun violence. As I contemplated these pictures, I looked up to see that the White House flag was flying at half-mast. I realized that this was in honor of John Lewis, and I somehow felt him there with me. I felt him looking at these pictures of individuals taken from us and saying keep going, tear down these walls erected to protect this man from democracy, keep fighting for change, make it happen.

We will continue to speak up & speak out until there is meaningful gun violence prevention legislation #goodtrouble pic.twitter.com/QDMe0ZTisr

I think that is what truly great leaders and — as my friend Fred would say, “helpers” — always do. They live personal lives as individuals yes, but in the way they do it, the vision they share with the world, their actions, words, and deeds lead countless others to act. They help show what is possible. They teach us how to be better, to strive harder, and to use the power we have for a bigger purpose. To me, as I reflected on the White House flanked by others standing at Black Lives Matter Plaza, this is the America I am working for and fighting for, it is the America John Lewis was working for and fighting for, and when the world has in their mind’s eye a picture of the best of America, John Lewis needs to be front and center.