TRAGEDY TO TRIUMPH: A TRANSFORMATIVE YEAR FOR GUN VIOLENCE PREVENTION

This year, we again witnessed the unspeakable tragedies of mass shootings, in addition to the unceasing daily gun violence that continues to impact so many communities across the country. But through it all, we persevered. Together, we turned anguish and anger into action, and made historic strides in the movement to prevent gun violence.

Every year, we share a handful of stories about our work with a focus on hope and promise, showing how Brady solutions are unique in the fight against gun violence as a public health epidemic. We need common sense gun laws, but there is so much more that has and will continue to make a difference. Brady Legal, our Crime Guns Initiative, and End Family Fire are all changing the unacceptable status quo. Our youth arm, Team ENOUGH, is harnessing the outrage of the “lockdown” generation and empowering youth leaders of the movement.

Our work across Congress, courts, and communities represent Brady’s holistic approach to tackling the epidemic of gun violence. And with your continued support we can have the America that Jim and Sarah Brady fought so tenaciously to achieve. 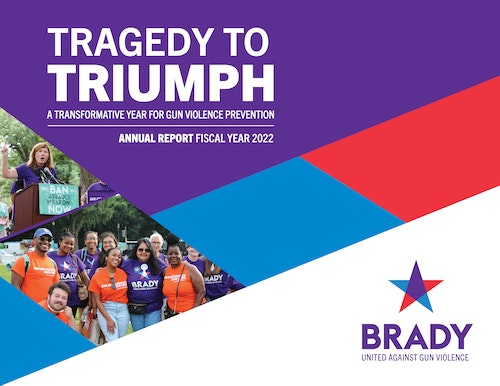 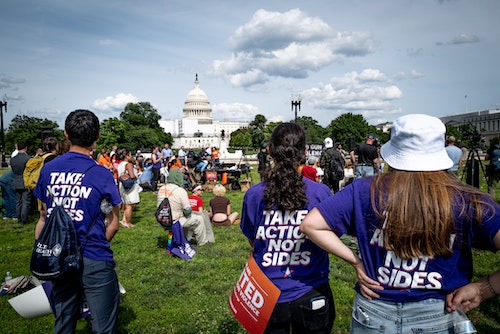 For too long, the United States has suffered from a serious public health crisis: On average, 321 people are shot and 111 are killed each day. These staggering numbers alone should be enough to move the needle on a number of life-saving policy solutions, but for years partisan gridlock has resulted in congressional inaction. Even as survivors and advocates persisted, we were all left asking: When will this end?

Enter Summer 2022: a grocery store attacked by a white supremacist; an elementary school terrorized by a mass shooter; an independence day parade interrupted by gunshots. In all, 38 people were killed, including 19 children. At least 68 others were wounded. These incidents, occurring only weeks apart, made national headlines, outraging communities across the country — but still, it was not clear if this would be the moment. Constant and horrific gun violence was not a new American phenomenon... 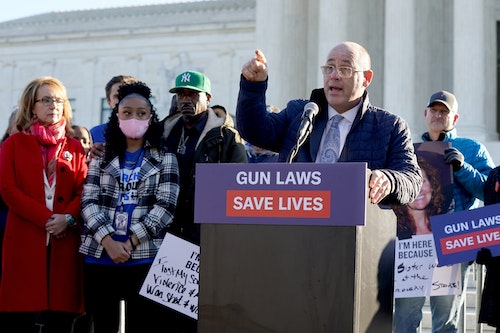 A CHANGING LANDSCAPE FOR GUN LAWS

“Why ... is [it] relevant to recount the mass shootings that have occurred in recent years? ... What is the relevance of statistics about the use of guns to commit suicide?”

Those were the words of Supreme Court Justice Samuel Alito in response to the first gun-related case the Supreme Court had decided in over a decade. Less than two months after the mass shootings in Buffalo, New York, and Uvalde, Texas, Alito admitted that “the ubiquity of guns and our country’s high level of gun violence” had no bearing on his vote to strike down a New York law that required “proper cause” to obtain a concealed carry license. Indeed, the Supreme Court’s decision in New York State Rifle and Pistol Association v. Bruen, authored by Justice Clarence Thomas, seemed entirely removed from both the realities of gun violence in the United States and the Second Amendment itself.

Bruen held that there is an individual constitutional right to carry a gun in public and that states cannot require concealed carry applicants to show “proper cause.” This decision has far-reaching implications, affecting not only the legal standard courts use to review gun laws, but also our everyday public safety: More firearms in public spaces will inevitably lead to more gun homicides and mass shootings... 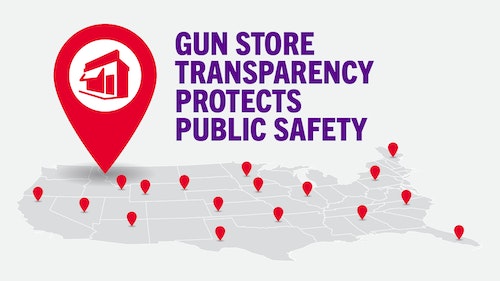 Yes! (And what happens when they don’t.)

You might be surprised to know that the top purchaser of firearms in the U.S. is taxpayers. Cities across the country spend more than $5 billion a year on guns for law enforcement agencies, not including a few billion more on ammunition and supplies. Worse, millions of dollars have been spent buying weapons from gun dealers cited for breaking federal firearm laws. This discovery has led to the most recent innovative solution from Brady’s Combating Crime Guns Initiative.

The Combating Crime Guns Initiative works to shift the burden of gun violence from the shooters to the suppliers of crime guns, which includes calling attention to irresponsible actors in the gun industry.

Your state and local executives choose where to spend tax dollars, often including which gun dealers to buy weapons from. However, there are very few policies ensuring they buy firearms from dealers who prioritize safe gun sale practices... 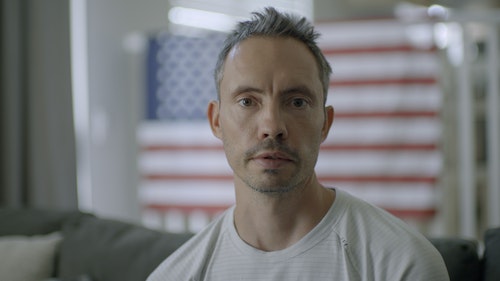 “Store your guns unloaded, locked, away from ammo.”

Eight small words make one impactful call to action! Brady launched End Family Fire in August of 2018, and since then the campaign’s ads and video PSAs have been displayed almost four billion times!

With 4.6 million children living in homes with access to unsecured or unsupervised firearms, it literally is the difference between life and death. You’ve seen the headlines all too frequently: “Toddler shoots pregnant mother,” “Brother finds gun, shoots younger brother.” These are all instances of family fire, where access to a loaded firearm brings unspeakable tragedy to a home, a family, and the community as well.

Brady expanded the work of End Family Fire last year to include not only unintentional shootings, but also the mass shootings that no one hears about: the 65 lives lost daily to gun suicide. While our gun suicide prevention work initially took a broad focus, this past year we’ve more specifically addressed the disproportionate toll on our veteran population. Brady will continue to expand the message to all communities that when someone is contemplating suicide, the seconds it takes to access their guns are critical, life-saving moments... 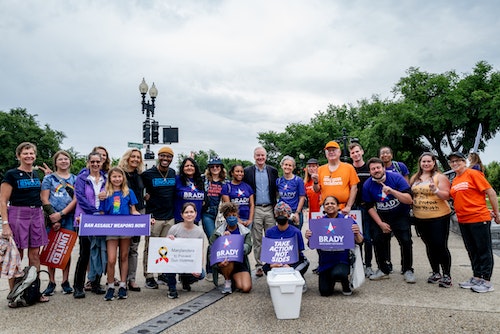 CHANNELING THE POWER OF GRASSROOTS ACTIVISM

Grassroots activism has long been a powerful force in American history, driving social and political change. Part of that force has been — and continues to be — Brady’s network of advocates and survivors who have championed gun violence prevention efforts at the state and local levels. A series of horrific mass shooting events in 2022, paired with everyday gun violence and a devastating Supreme Court ruling that has the potential to flood our communities with more firearms, has produced a groundswell of support for gun violence prevention efforts across the country.

With momentum on our side, Brady and Team ENOUGH’s efforts in communities and statehouses across the country have resulted in the recent passage of more than 30 life-saving gun violence prevention laws

We entered the year poised to regulate home-assembled ghost guns. Led by Brady California and Team ENOUGH, grassroots activists helped institute our nation’s first bans on such weapons — and the parts and kits used to build them — in numerous localities across California. Meanwhile, Brady activists in four other states (NY, MD, WA, and IL) also shepherded life-saving bans on ghost guns into law... 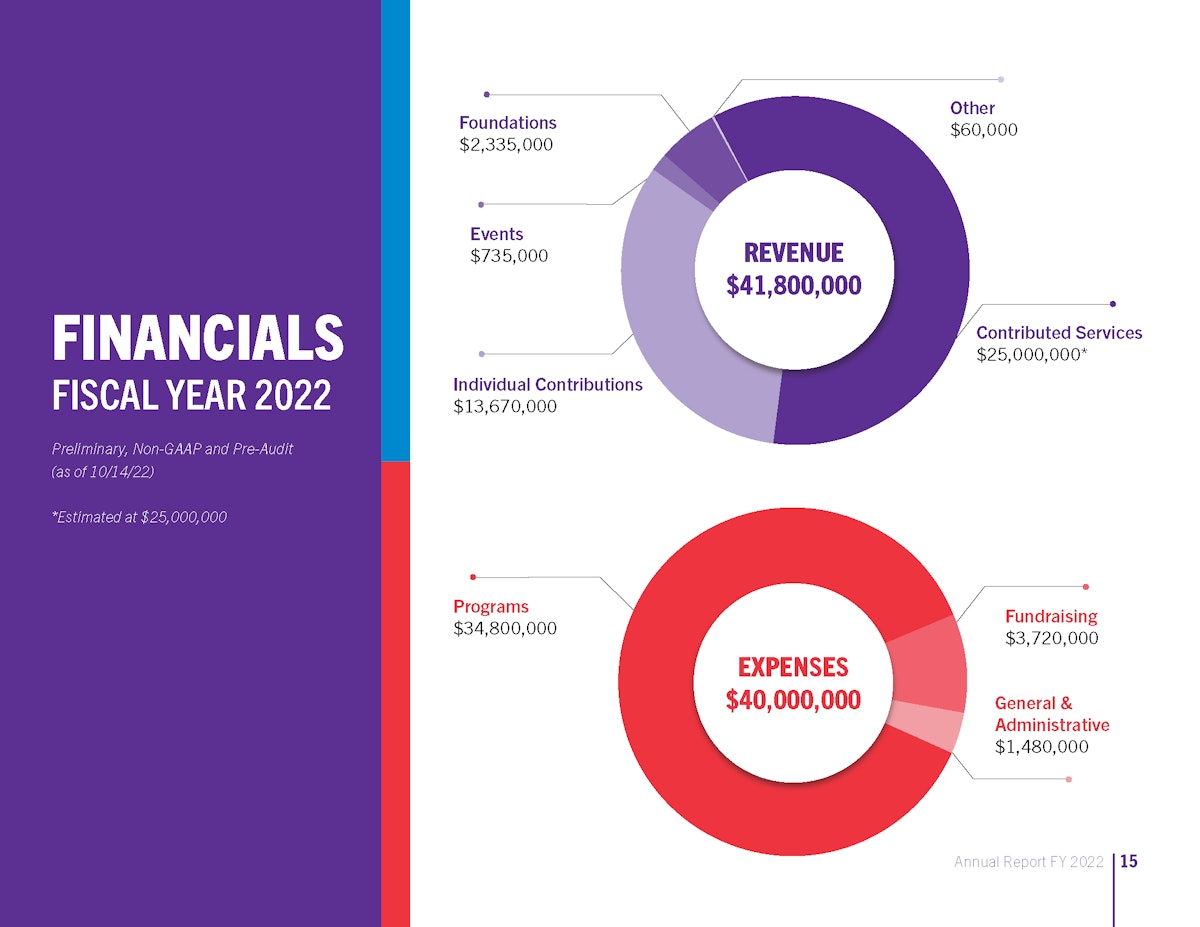