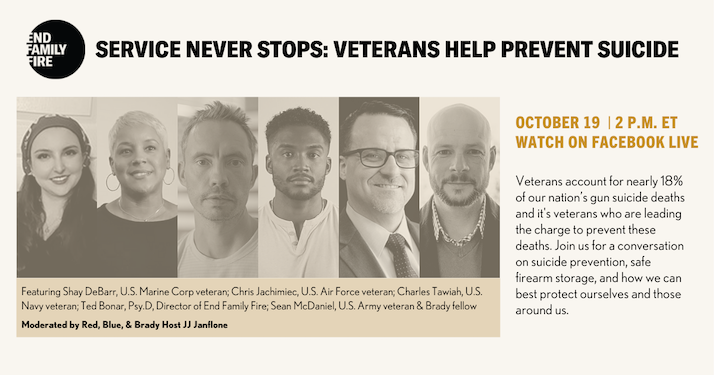 Watch the archived virtual event below!

America’s deadliest shootings are the ones we rarely talk about: Over half of all gun deaths are suicides. This crisis has an outsized impact on the veteran community, with 63 veterans dying by suicide each day. But veterans from across the country are uniting to address this crisis by practicing and promoting safe firearm storage. To discuss suicide prevention, safe firearm storage, and how their “service never stops” as veterans, join our panel of experts and veterans with over 40 years of collective service in the U.S. Army, Navy, and Marines on Tuesday, October 19, at 2 p.m. ET.


Ted is a nationally-recognized trainer and speaker and is known as a subject matter expert in suicide prevention, lethal means safety, military and veteran mental health concerns, and post-traumatic stress disorder (PTSD). He serves on the Healthcare Advisory Committee for PsychArmor and was previously the chief of continuing education programs at the Center for Deployment Psychology (CDP), where he oversaw and implemented training programs focused on military-related behavioral healthcare concerns, evidence-based treatment of PTSD, and suicide prevention and treatment. Most recently, Ted led the creative and planning efforts for End Family Fire’s “Service Never Stops” campaign.


Over the course of his 20-year career, Chris has served in multiple military leadership roles in Nevada, Germany, and Korea, and is a veteran of the Afghanistan war. In 2016, he was recognized for his tireless work as the “air combat command first sergeant of the year.” In July 2017, he lost his brother to suicide after a courageous battle with post-traumatic stress. As a wounded warrior, Chris dedicates his life to finding and utilizing multiple pathways to recovery for mental health issues, grief, and trauma. Chris is a distinguished member of the governor and mayor’s “challenge teams” in Nevada and Las Vegas, and a key feature in End Family Fire’s “Service Never Stops” campaign.


Serving in the Navy from 2013 - 2017, Charles was deployed twice with the Harry S. Truman ship to the Mediterranean Arabian Gulf as an aviation boatswain's mate crash and salvage firefighter. Military service is rooted in Charles’ family; his father served 26 years in the Navy and his mother is a supportive military spouse. Charles dedicates his time to supporting the veteran community through his work at a nonprofit called PsychArmor, and he was most recently was a key feature in End Family Fire’s “Service Never Stops” campaign. Charles lives in San Diego, CA, with his fiance, Mirna, and their Yorkie, Cochise.


Shay’s 20-year career as a Marine includes service in North Carolina, California, and Hawaii, with experience in roles such as a deceptive electronics countermeasures technician, career planner, staff sergeant, and gunnery sergeant. Shay’s personal decorations include the Navy and Marine Corps Commendation Medal, the Navy and Marine Corps Achievement Medal with two Gold Stars, and the Marine Corps Good Conduct Medal with one Silver Star. Growing up in the country and after serving 20 years in the Marine, Shay cannot imagine living without her firearms, but it wasn’t until getting married and having kids that she realized how important safe gun storage is. Shay believes that safe gun storage is one of the most effective ways to reduce gun suicide and protect her family and loved ones. Most recently, Shay was a key feature in End Family Fire’s “Service Never Stops” campaign.


In 2011, Sean enlisted in the Army and was commissioned as a field artillery officer, stationed in Fort Campbell, KY, and was later deployed to Helmand Province, Afghanistan, from 2016-2017 as a logistics officer. Following this tour, Sean was assigned to Fort Hood, TX, serving with the 3rd Cavalry Regiment, and was deployed to Manbij, Syria, from 2018-2019 as the squadron fire support officer and operations officer. It was here where Sean’s passion for public policy grew, as he helped implement a joint training and combat patrol mission between America and Turkey. During this time, Sean gained a deep understanding of how policy decisions at the strategic level have an incredible ability to maintain and prevent further conflict. In his free time, Sean enjoys playing golf, rock climbing, hiking with his dog, and staying active.

The majority of veteran suicides are gun suicides. Watch our new veteran-centered PSA below, “Service Never Stops,” to learn about how safe firearm storage can reduce gun suicide in America.
Learn More