Taxpayers are the number one buyer of firearms in America. Altogether, taxpayers spend more than $5 billion a year to buy guns and ammunition for our nation’s law enforcement agencies. Our analysis shows millions of these dollars have gone to gun dealers that have been cited for violations of the law. The solution is simple: government agencies must conduct appropriate due diligence to properly vet all firearms vendors. 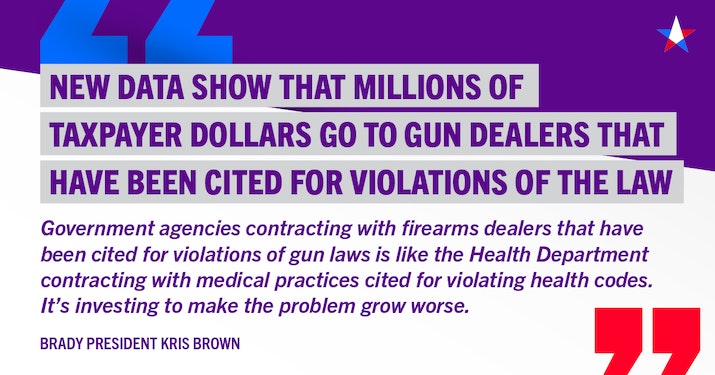 Data obtained by the American Friends Service Committee (via a California Public Records Act, or CPRA, request) and analyzed by Brady show that California tax dollars have been used to procure service weapons and ammunition from gun dealers that have been cited for violations of federal gun laws — sometimes repeatedly — and taxpayers thereby have patronized dealers cited for: failing to complete required background check forms or otherwise properly follow procedures to certify that customers were not prohibited; losing customer paperwork critical to law enforcement investigations; failing to submit multiple sales reports; and more. Such practices can impede law enforcement investigations and contribute to the gun trafficking and crime that fuel America’s gun violence epidemic.

Read our full report Take action in your community

Government agencies from across California have spent tax dollars at LC Action and Adamson Police Products, which have been cited for violations of gun laws. 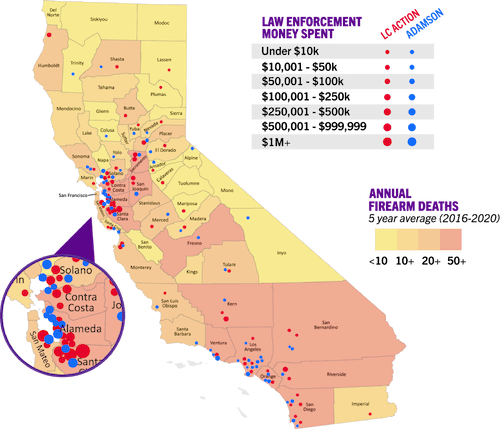 As documented in the map above, we found that at least 90 California law enforcement agencies purchased weapons from firearms dealers that did not follow all applicable gun laws. This strongly suggests that adequate vetting processes are not in place for ordering large volumes of service weapons and ammunition — at great taxpayer expense.

And this is likely just the tip of the iceberg.

Based on these findings in one of the largest states with the strongest gun laws, there is every reason to suspect the same troubling pattern occurs nationwide; however, we do not presently have access to that data. This purchasing trend is especially troubling at a time when gun violence is estimated to cost the American economy at least $557 billion every year, not to mention the impacts on victims’ lives and community well-being.

There is substantial evidence that better business practices employed by gun industry members can lead to reductions in gun trafficking and crime. For example, when ATF inspected the 1% of gun dealers that supplied almost 60% of crime guns nationwide, it found that 75% of these dealers had violated federal law (compared to 37% of a random sample of dealers), including significant recordkeeping violations and participation in sales to potential gun traffickers and prohibited persons.

How Government Agencies Can Ensure They Patronize Responsible Firearms Businesses

Improved and responsible firearms procurement practices can save lives of law enforcement officers and citizens alike.

Our government agencies can play a critical role in preventing gun violence by establishing procurement and oversight policies that require gun dealers to comply with firearms laws and adhere to best practices as a prerequisite to receive taxpayer-funded purchases. This would incentivize compliance and safe dealing reforms, helping reduce the number of firearms directed from the legal to illegal markets via gun dealers. It would also ensure taxpayer dollars are being spent wisely while upholding public safety, which is the ultimate goal of our nation’s law enforcement agencies. 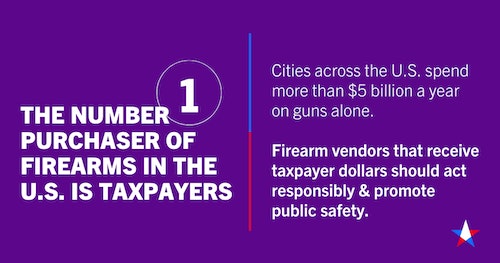 Local, state, and federal agencies can incorporate basic due diligence to ensure no taxpayer dollars are spent on gun dealers that fail to follow gun laws. We urge local governments in California and nationwide to examine gun dealers’ compliance with state and federal laws and only purchase firearms or equipment from businesses that are determined to follow them.

“It’s simple: Local, state, and federal governments should ensure that the gun manufacturers and dealers they purchase from using taxpayer money comply with the law. After all, shouldn’t the dealers receiving taxpayer funds have a record of abiding by the gun laws intended to promote safety and be partners in the effort to prevent gun crime?”

Government agencies can ask firearms vendors about their business practices and then decline to purchase from dealers that do not adequately substantiate their internal controls. New Jersey recently mandated this through its Executive Order 83, which outlines public safety principles and requires the state to inquire whether potential firearms vendors adhere to such principles. Our report found that Executive Order 83 was an effective tool to ensure that taxpayer dollars are used wisely and in ways that promote gun safety by incentivizing safer business practices that reduce gun violence.

Want to Take Action in Your Community? Here's What You Can Do Now

You can inquire about the procurement practices of government agencies in your community and take action to promote responsible firearms procurement.

Work with Us to Ensure Responsible Procurement in Your Community

We’re mobilizing on-the-ground activists. Connect with our experts, and we’ll help you uncover the firearms procurement practices in your community and advocate for solutions.

Look Up Gun Store Violations in Your Community

Our Gun Store Transparency Project exposes gun stores cited for breaking the law, including whether federal authorities are failing to hold them accountable. Type in a zip code and find gun dealers that have been cited for violations in your area and across the country.