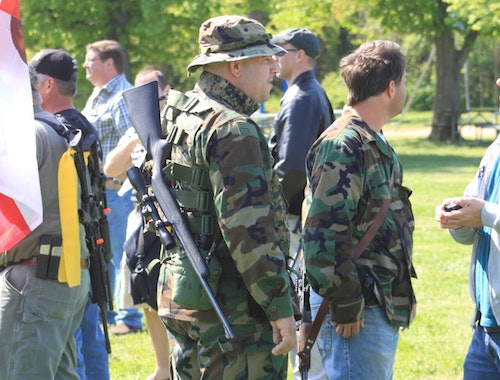 Armed extremists in so-called “militia” groups (from the organized Three Percenters to the more decentralized Boogaloo Bois movement) have gained increasing media attention in 2021, as they used firearms as tools of intimidation and violence in events across the US. And who better to comment on those who participate in these militias than those who served in the US military? As such, Brady is joined by a panel of veterans to comment on: what it’s like to see weapons of war in US streets and government buildings; the militarization of civilians; how they feel about the rise of veterans in these so-called “militias”; and what those concerned about the rise of “militia” groups can do to push back. To cover all this and more, hosts Kelly and JJ are joined by veterans Timothy "TJ" Ryan, Dr. Kyleanne Hunter, and Congressman Jason Crow.

Mentioned in this podcast:
Letter from Jason Crow and Robin Kelly on weapons of war (Jason Crow)
We Are Not Done Yet (HBO)
Addressing the threats of armed militias and white vigilantism in America (Brady)
The 2nd amendment and public safety after Heller (Brady)
Armed intimidation isn’t peaceful protest (Brady)
What are so-called “second amendment” sanctuaries? (Brady)