Who are the Gun-Toting “Boogaloo Bois?”

Who are the Gun-Toting “Boogaloo Bois?”

White men wearing Hawaiian shirts and igloo emblem are the face of the “boogaloo” movement: an extremist, pro-gun subculture aligned with the far-right and white nationalists. 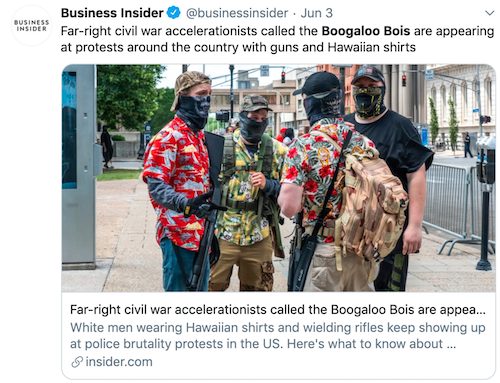 Racist, right-wing, pro-gun, anti-government extremist propaganda encouraging the use of firearms to threaten violence and insurrection is showing up in protests across the country. Who are these men bearing arms and wearing funny luau and igloo symbols? What drives their violent threats?

Despite their innocuous-seeming dress and symbolism, the threats they pose — and mobilize upon, by arming themselves with firearms to promote violent insurrection and a race war — are deadly. In May, a purported boogaloo proponent decided to take advantage of protests against police to fatally shoot two law enforcement officers in California. Government officials are becoming increasingly aware of the violent threats armed boogaloo extremists pose.

A leaked memo revealed that the Department of Homeland Security (DHS) believes “anarchist and anti-government extremists” like those adopting boogaloo symbolism pose “the most significant threat of targeted low-level, protest-related assaults against law enforcement.”

The threats of gun violence caused by boogaloo extremists are so grave that the Bureau of Alcohol, Tobacco, Firearms and Explosives was compelled to issue a safety bulletin to Baltimore law enforcement officers. The bulletin warned, “In alignment with their Second Amendment views, members of this movement are likely to possess multiple types of weapons. Use caution if coming in contact with any individual(s) whom [sic] may identify with the ‘boogaloo’ movement.”

But the boogaloo threat is not aimed solely at law enforcement. Boogaloo extremism also has roots in white supremacy, calling for a violent uprising to destroy America’s multicultural society.

What is the “Boogaloo” and Where Did it Originate?

Less a cohesive movement and more a rallying cry, the term “boogaloo” refers to an obscure meme. According to the Southern Poverty Law Center,

The boogaloo meme emerged concurrently in antigovernment and white power online spaces in the early 2010s. In both of these communities, ‘boogaloo’ was frequently associated with racist violence and, in many cases, was an explicit call for race war. Today the term is regularly deployed by white nationalists and neo-Nazis who want to see society descend into chaos so that they can come to power and build a new fascist state.

Referencing a 1980s movie sequel that was famously nothing more than a rehashing of the original, the boogaloo meme calls for the rehashing of violent uprisings in American history. The meme — Civil War 2: Electric Boogaloo, or sometimes, American Revolution 2: Electric Boogaloo — sounds like a joke to the uninitiated. And that is exactly its aim so that the threat appears mundane. But to those in extremist circles, it serves its purpose as a brutal meme that “circulates instructions for a violent, viral insurgency.” Converting internet culture, or specifically meme culture, into real-life symbolism required sanitizing “boogaloo” into “big luau” or “big igloo,” and resulted in armed protesters in Hawaiian shirts and insurrectionist U.S. flags with igloos in place of a field of stars.

Of course, it is not the silly luau and igloo symbolism, but the powerful firearms these far-right extremists bear that make their violent threats so troubling. 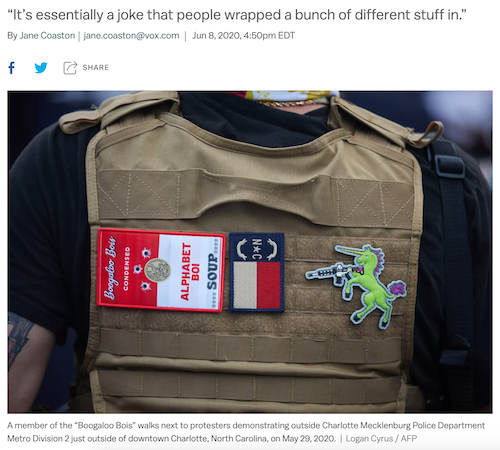 However benign the meme and symbolism may appear, at its core, the boogaloo has always remained a reference to mass civil conflict or civil war. While boogaloo extremists are united in their calls for armed insurrection, they have multiple reasons for doing so. The militia movement and radical gun rights activists typically promote the boogaloo as a war against the government or liberals, while white supremacists and neo-Nazis conceive of the boogaloo as a race war or a white revolution. “Accelerationist white supremacists are particularly apt to use ‘boogaloo’ — they seek the violent collapse of modern society in order to bring about a new, white-dominated world,” explains the Anti-Defamation League. Boogaloo followers are anti-police, especially the militarization of police, and seek to trigger the civil warfare they see as necessary to break down society before they rebuild it to benefit themselves.

To that end, they have found many opportunities recently to make use of current events to promote their cause. This winter they pushed back on gun policy reforms such as extreme risk protective orders, which allow law enforcement to remove firearms from gun owners who pose a threat of harm, by holding armed rallies and pushing counties to declare themselves “Second Amendment Sanctuaries.” After states issued stay-at-home orders this spring in response to the coronavirus pandemic, protesters bearing firearms swarmed state capitol buildings across the country. In both types of protests, the extremists who viewed themselves as standing up to government tyranny were moved to take up arms. 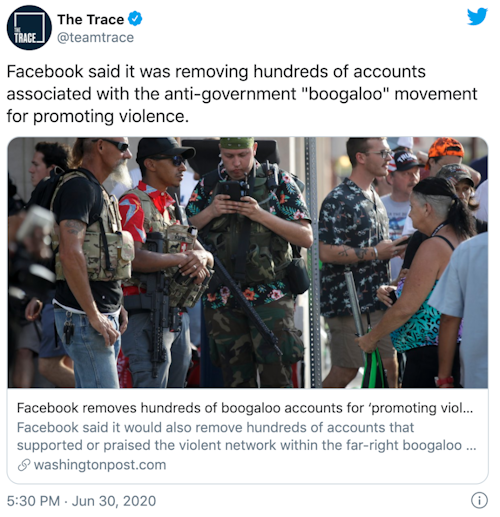 But it has been the more recent protests calling for police defunding, reform, and/or abolition that have incited the boogaloo extremists to take even more violent action. Boogaloo memes cite gun rights “martyrs” from Waco, Ruby Ridge, and the Malheur National Wildlife Refuge standoff, as well as Duncan Lemp, who was killed by Maryland police in March in a raid to seize his illegal firearms. Extremist, insurrectionist gun rights groups have taken advantage of the murder of George Floyd as a “boogaloo triggering” event, and the results have been lethal:

In Oakland, California, in May, two boogaloo adherents shot two federal protective service officers, killing one, after posting in a boogaloo Facebook group about targeting federal agents. One of the men also shot and killed a deputy sheriff in an effort to avoid arrest. Both men have been charged with murder and attempted murder. The gun used was a “ghost gun” assembled from parts so as to be untraceable. In Albuquerque, New Mexico, a protester calling for the removal of a statute of the Conquistador Juan de Oñate was shot and injured by a member of the “New Mexico Civil Guard,” a white supremacist group espousing boogaloo views online. In Las Vegas, three men with ties to extremist boogaloo groups were accused by federal prosecutors of “exploiting the real and legitimate outrage over Mr. Floyd’s death for their own radical agendas” and were charged with multiple state and federal violations of conspiracy to cause destruction, as well as possession of Molotov cocktails they planned to take to a Black Lives Matter protest to ignite a riot.

While extremist views have long fomented protests and demonstrations, when insurrectionist violence and racial conflict is the desired outcome, easy access to firearms causes justifiable concern. Weak state and federal gun laws enable followers of violent ideologies to obtain high-powered arsenals without submitting to background checks. By taking advantage of the gun show and private sale loopholes, or by skirting the law altogether by assembling ghost guns, “the worst actors amongst boogaloo groups possess a distinct advantage over government officials and law enforcement: They already realize that they are at war.”

Finally, because boogaloo extremists are motivated to sow racial discord, it is important to note that even if all the above policies were adopted, in most states, people who have been convicted of a hate crime misdemeanor are able to pass a background check and still possess a firearm. Past violent misdemeanor crimes are one of the most reliable predictors of future violent crime, while hate crime misdemeanors tend to be escalated into even more violent behavior. Prohibiting access to firearms by people who have been convicted of hate crimes is imperative for preventing violent boogaloo uprisings propelled by racism and white supremacy.