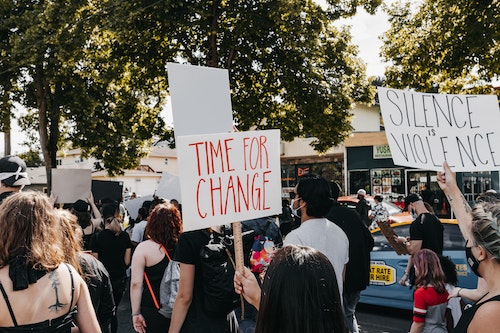 While discussions of white supremacy (the belief that the United States was, and should, remain a mostly white country) have been increasingly discussed, there has been a part of the equation we haven't really touched on: the role white women have played in protecting and perpetuating white supremacist hatred.

And while white nationalist groups may be dominated by hypermasculine, misogynist rhetoric, they nevertheless hold many women in their ranks, from the Ku Klux Klan to the Aryan Nation to the alt right. But role do these women play, and what made them join these hate groups?What made them so vulnerable, and then so supportive, of hateful propaganda? And disturbingly, how do people get radicalized into committing violence?

To find out, hosts Kelly and JJ are joined by journalist and author Seyward Darby, author of the book Sisters in Hate: American Women on the Front Lines of White Nationalism .Together, we discuss: how through profiling three prominent women in the white nationalist movement*, Darbytraces out what propelled these women (and many like them) into white nationalism; how insidious this rhetoric is; and what we all can do to combat hate-based violence.

*One woman profiled, Corinna, has left the alt right - you can learn about her journey in episode 97 of this podcast

Mentioned in this podcast:
Origin of an Insurrection (Brady)
Finding the Women of the White Nationalist Movement (CNN)
How Do Women Become White Supremacists (Rolling Stone)
The Women Behind the Alt-Right (The Atlantic)