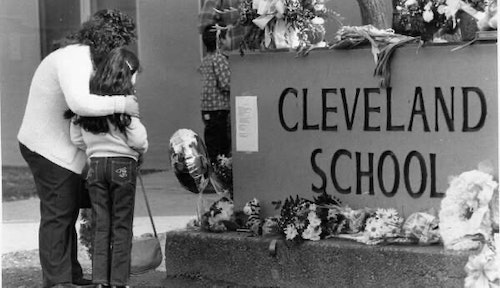 Before there was Parkland or even Columbine, there was Cleveland Elementary School. But for many, the name of the Stockton, California school is unfamiliar.

On January 17, 1989, a former student opened fire on the playground of Cleveland Elementary School. Within 3 minutes the gunman fired 106 rounds from his recently-purchased AK-47, killing 5 students and injuring another 31. The youngest student victim was 6; the oldest, 9. Today, hosts Kelly and JJ are joined by Julie Schardt, a founding member of Cleveland Remembers, a Brady California chapter member, and a former teacher at Cleveland Elementary School who was there that day. Julie shares with us her memories of what happened, the students who were lost, and what drives her to still be engaged in gun violence prevention work to this day.