Thank President Biden for Taking Action to Save Lives!

The executive actions just announced by President Biden are the boldest set of solutions for America's gun violence epidemic that we have seen in 30 years.

Brady Applauds the Nomination of David Chipman for Director of the U.S. Bureau of Alcohol, Tobacco, Firearms and Explosives

Brady Celebrates Bipartisan Passage of the Violence Against Women Act Reauthorization in the U.S. House of Representatives

Brady Celebrates the Passage of H.R. 8 and H.R. 1446 in the U.S. House of Representatives

“A Victory for Democracy:” Brady Applauds the Passage of the For the People Act in the U.S. House of Representatives

“The Time is Right for Action:” Brady Urges Passage of H.R. 8 and H.R. 1446, Bills to Expand and Strengthen Background Checks

Brady Calls on Schools to Educate Families on Firearm Storage

“Common-sense and Needed,” Brady Urges Quick Passage of H.R.1 and S.1 in Both Chambers of Congress

Brady Marks the Opening of the Maryland Legislative Session

Ahead of Nationwide Armed Protests, Brady Calls on State Legislatures to Prohibit Open and Concealed Carrying of Firearms in Legislative Buildings

“Bad for Business and Bad for Public Safety:” Brady Calls on Office of the Comptroller of Currency to Withdraw Proposed Lending Rule

“President Trump’s Threat to Public Safety Must End:” Brady Calls for Invocation of 25th Amendment and For State Legislatures, Congress to Safeguard Against Violent Extremism

Following Assault on U.S. Capitol, Brady Calls for President Trump and Those Who Have Undermined Faith in Our Democracy to Denounce Violent Insurrection

Brady Applauds the Historic Selection of Sec. Alex Padilla to Represent California in the U.S. Senate

On 40th Annivesary of John Lennon’s Murder, Brady Podcast Discusses How Common-Sense Laws Could Have Prevented His Death and the Millions More from Gun Violence Since

Brady Looks to a Bright Horizon for Gun Violence Prevention

“Justice Was Not Served:” Brady Condemns Lack of Action in the Investigation into Breonna Taylor’s Killing

Concrete, Actionable, and Common-Sense: Brady Applauds the Introduction of the Firearms Retailer Code of Conduct Act by Rep. Debbie Mucarsel-Powell

Following Attack on Protestors in Kenosha, Brady Reiterates Call For Attention to the Threat of Armed Vigilantism

Brady Marks 55 Years of the Voting Rights Act: A Call to Protect Our Democracy

Brady Marks Six Years Since the Death of Jim Brady

Brady Applauds the California Assembly for Passing a Bill Requiring ‘Microstamping’ for Specific Firearms, a Forward-Thinking and Common-Sense Policy

Brady Celebrates the 20th Anniversary of the Million Mom March, a Watershed Moment in the Gun Violence Prevention Movement

Amid Fear, Uncertainty Caused By Coronavirus Pandemic, Brady Urges Attention to the Lethal Link Between Guns and Suicide

Brady Opposes Designation of Gun Stores as ‘Essential’’ by the U.S. Department of Homeland Security

Brady Calls on the President to Act on Gun Violence, Not Share Hollow Condolences

“A Shot to the Heart of Our City:” Brady Stands with Milwaukee

Ahead of South Carolina Debate, Brady Looks to Hear How Candidates Will Take on Gun Violence

Brady Disappointed in Lack of Discussion, Mention, of Gun Violence in Tonight’s Debate

“We Are Undeterred:” Brady Expresses Disappointment in Virginia Senate Judiciary Committee Decision to Delay Action on Assault Weapons Ban Until 2021

It’s a Three-peat: Moderators Again Fail to Bring Up Gun Violence at Debate

Where is the Outrage? Brady Asks Why Moderators, Media Ask Too Little on Gun Violence

Brady Mourns Murder of Three Children and Their Mother from Intimate Partner Violence, Calls for Action, “Enough is Enough”

A.G. Barr’s New Gun Violence Prevention Initiative ‘Toothless,’ Focusing on Policing Instead of Solutions that Stop Violence Before it Happens

Brady Condemns Inaction, Walk-Back on Reauthorization of the Violence Against Women Act

Brady Celebrates Virginia Election Results, Proving Once Again That When Gun Violence Prevention is on the Ballot, Commonsense Wins

Brady Leaders Honored as National Champions in Their Fields

Victory: Indiana Court of Appeals Rules for City of Gary Against Gun Industry

New Mexico Sheriffs’ Association: For the People or for the NRA?

On Eve of Shooting Anniversaries, Communities Join in Support of Those Impacted by Gun Violence

Brady Applauds Reauthorization of Violence Against Women Act in House

Gun Violence is a Public Health Crisis: 5 Things The Public Needs to Know

Brady Hails Passage of H.R. 8 in House of Representatives

Brady Welcomes Legislation to Keep Guns Away from Domestic Abusers

The Brady Campaign and Center Names Kristin Brown as President

Brady Campaign on Kavanaugh Confirmation: “A Sad Day for America”

8 Children Unintentionally Killed or Injured by Guns in U.S. Every Day

STATEMENT FROM THE CHAIRMAN OF THE BOARD, KEVIN QUINN

Is a gun a tool, or is it something more? "American Totem" documentarian Sue Hilderbrand joins Brady to discuss what makes a firearm move from an object to an emotional totem, and what we all need to know to come together to fight for gun violence prevention.

The US House of Representatives passed H.R. 8 and H.R. 1446, two bills designed to expand and strengthen Brady Background Checks. But where did these bills come from? What could they do? And, where do we go from here?

The NRA has long claimed that the spread of firearms is essential to maintaining freedom in America. But is this argument true? To find out, hosts Kelly and JJ are joined by Brady President Kris Brown and political philosopher Dr. Firmin DeBrabander.

110: Insurrection at the Capitol: What’s Broken and How to Fix It

Season two kicks off with an in-depth discussion on the January 6 attack on the Capitol, a primer on the urgent steps we must immediately enact to guard against further violent attacks, and how gun safety underlies all of them.

Forty years ago on December 8, 1980, John Lennon was shot and killed. We discuss John Lennon's life and death, and what gun violence prevention is like 40 years later.

In this live episode, hosts Kelly and JJ speak with Brady President Kris Brown, Parkland father and author Fred Guttenberg, Dr. Dana Winters of the Fred Rogers Center, and Clayton Rosenberg of the Alliance of Concerned Men, to talk about how we can all "find the helpers."

To unpack a long history of mistreatment, firearms, and disenfranchisement facing Indigenous communities, Brady is joined by Christine Sikowis Nobisss of the Great Plains Action Society.

96: SCOTUS, Gun Violence Prevention, and What it All Means

A PA court ruled PLCAA as unconstitutional. What does it mean, and where do we go from here? Brady discusses with a panel of experts.

94: Trying to End an Epidemic

Brady presents to you audio from our live event, “Brady Book Club--the Violence Inside Us.” We get deeper into the book with Senator Chris Murphy, discussing why it needed to be written, why it matters, and where we go from here.

Few know that police officers are at a higher risk of suicide than any other profession, with the vast majority of officers dying of firearm suicide. To discuss these rates, and what people can do to prevent suicide, Brady is joined by Steve Hough of Blue HELP.

85: The Tale of Two Americas--Eyes on Kenosha

Brady's legal and grassroots advocacy experts convene to discuss what happened in Kenosha--and what it means.

53: The Day Jim Brady Was Shot

Kris Brown and Jon Lowy talk about the March morning in 1981 that changed the course of history.

Brady President Kris Brown talks about how we can prevent gun violence in the time of Covid-19.

40: Taking Our Democracy Back

This week, Brady is in Iowa! JJ is joined by Brady President Kris Brown in Des Moines for the “We The People 2020: Protecting our Democracy a Decade After Citizens United" forum.

39: History in the Making

JJ is joined by Brady President Kris Brown, and State Director of Virginia at the Coalition to Stop Gun Violence, Lori Haas. Together, they discuss the gun violence prevention legislation has cleared committee in the state of Virginia!

2020 Recap: Our Biggest Wins in the Fight to Prevent Gun Violence

Virtual Event | Finding and Being a Helper with Fred Guttenberg

Rep. John Lewis Will Always Be My Hero

A Conversation on Preventing Gun Violence with Chairman Schiff 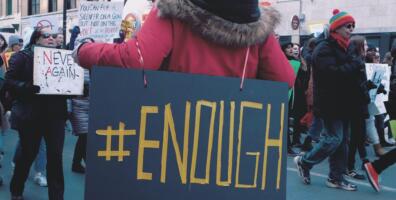 Reducing gun violence in impacted communities by stemming the flow of crime guns into those areas.

To the Moderators of the First Presidential Debate 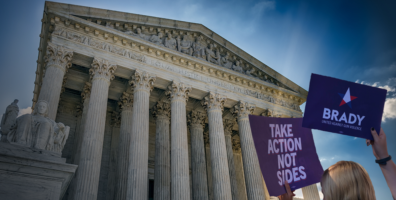 What You Need to Know About the NRA's Supreme Court Lawsuit

What you need to know

The Firearms Retailer Code of Conduct Act establishes requirements for gun dealers to curb the diversion of firearms into the illegal market.

It's been more than 40 years since we've started the conversation about gun violence preventions and safety.

It’s time we unite people from coast to coast, liberal and conservative, young and old, fed up and fired up, to work with us and end what is taking so many American lives. It’s in our hands.