URGENT: Tell the Senate to Confirm David Chipman to Lead the ATF 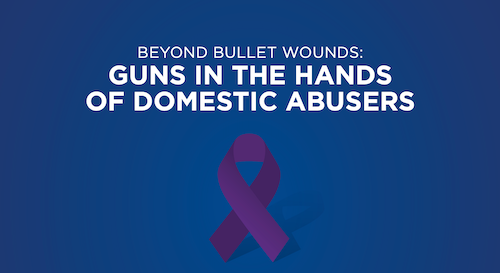 Brady's 2018 report explores these tragic statistics and the stories behind them, as well as ways to save lives moving forward.

The report finds that:

Women in America are 16 times more likely to be killed with a gun than women in other high-income countries. Kate Ranta was shot by her husband in front of her 4-year-old son. She's using her story to inspire change.

The report also notes that America’s lax gun laws make the issue even more acute, with American women being 16 times more likely to be killed with a gun than in other high-income countries. While the federal Brady Background Check system bars people convicted of domestic violence crimes or who are subject to restraining orders for certain types of domestic violence from purchasing guns, one in five guns today are sold without a background check — whether online, at gun shows, or in other private sales.

READ THE FULL REPORT
Beyond Bullet Wounds: Guns in the Hands of Domestic Abusers
https://brady-static.s3.amazon...

If you or someone you know needs help or a safe place, please contact the National Domestic Violence Hotline at 1-800-799-SAFE or go to thehotline.org to chat without having to say a word. The National Sexual Assault Hotline at 1-800-656-HOPE is available to victims and survivors and can refer you to a local crisis center.

*Everytown for Gun Safety defines mass shootings as any incident in which four or more people were shot but not necessarily killed, excluding the shooter.