We must remove voting barriers for people with a felony record.

The right to vote is occasionally framed as a privilege, but voting is the cornerstone of our democracy. For people with a felony record, there are many barriers standing in the way of the restoration of their voting rights. An estimated 4.5 million citizens are denied the right to vote because of a past criminal record. 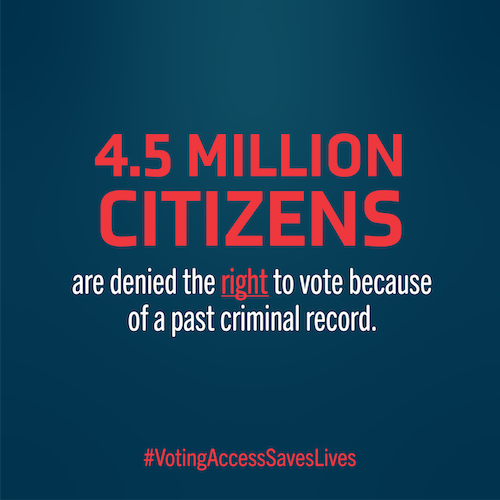 “Silencing the voices of people with convictions weakens the democratic system of government. … When formerly incarcerated people can't vote, all of us miss out on the perspectives and experiences they can offer our country's political conversation.”

According to the Brennan Center, about one in 13 Black Americans are ineligible to vote, which is a rate four times higher than non-Black Americans. And much of that stems from the fact that roughly 2.2 million Black Americans face voter disenfranchisement based on a previous criminal record.

Voter disenfranchisement based on a previous criminal record is an issue that Black communities, voting rights advocates, and racial justice activists have known for quite some time: the communities most in need of social policy reform are the most disenfranchised by because of strict state laws. This silencing is intentional voter suppression.

Black Americans who are disenfranchised because of past criminal records have their voices suppressed when it comes to the gun violence prevention movement.

According to the Pew Research Center, 57% of Black respondents know someone who has been shot — in comparison to 43% of white respondents — and members of their community are often unrepresented by those in office.

It is imperative to distinguish the right to vote from the right to own a firearm. In 2016, Virginia Gov. Terry McAuliffe unintentionally removed barriers previously prohibiting individuals with felony records from being able to legally purchase a firearm. Activists should ensure their elected officials are aware of how the restoration of voting rights and restoration of gun rights overlap to avoid unintended consequences that could further endanger communities.

Despite past missteps, it is imperative that gun violence prevention advocates support and protect the voting restoration process.

The inclusion of previously incarcerated individuals who are often from the communities most impacted by gun violence allows for a broader coalition of voters invested in reducing gun violence. Finally, the restoration of voting rights for all formerly incarcerated citizens would move the country one step closer to abolishing second-class citizenship.

HOW YOU CAN TAKE ACTION NOW

Restoring voting rights is a complex issue that is challenging to address on a local level. But there are opportunities where activists can help steward long-term changes.


Review your state's policy on voting restoration and who is eligible for restoration. This includes understanding how to interpret eligibility in “Get Out the Vote” efforts often held during an election year.


Advocate for statewide policy changes to restore voting rights to people with felony convictions. Currently, only two states — Maine and Vermont — have no restrictions on voting rights. In all other states, gun violence prevention advocates could push state legislators to adopt more progressive restoration policies. For example, policy reformation could include automatic restoration of voting rights post-release, similar to a policy adopted by Rhode Island in 2006.

RECOMMENDATIONS FOR POLICYMAKERS AND ELECTION OFFICIALS

How state officials can make infrastructure improvements to increase access to mail-in and absentee voting: