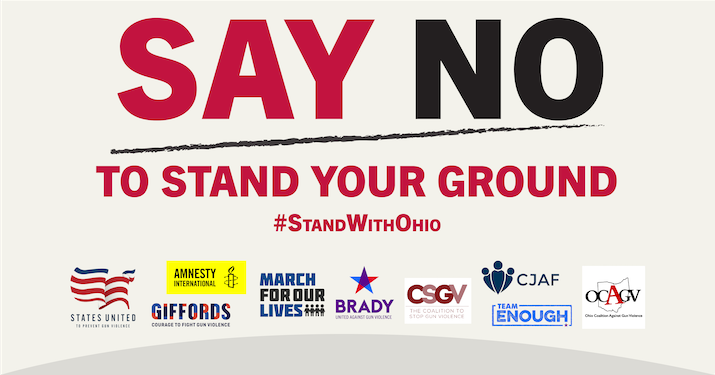 Ohio's new "Stand Your Ground" bill — falsely masked as a bill concerning a ‘duty to retreat’ in self-defense — is the same policy that has increased violence in states across the country and has disproportionately affected communities of color.

Columbus, Ohio, January 04, 2021 - A coalition of Ohio-based and national advocacy organizations decried Ohio Governor Mike DeWine’s signing of a dangerous ‘Stand Your Ground’ bill into law. This bill was signed by Governor DeWine at the end of the lame-duck session after being considered and strongly opposed for a full year. The legislation, falsely masked as a bill concerning a ‘duty to retreat’ in self-defense, is the same policy that has increased violence in states across the country and has disproportionately affected communities of color. Gov. DeWine has failed the people of Ohio in signing this bill to become law.

“Despite the objections from Ohioans, from law enforcement, and from mayors and elected officials across the state, Gov. DeWine has caved to the interests of a fringe minority of lawmakers beholden to the gun lobby and allowed a dangerous ‘Stand Your Ground’ bill to become law in Ohio. There is no debate over this bill and these policies: Stand Your Ground laws make communities less safe. They increase violence and homicides and are more likely to be used to legally ‘justify’ the murder of people of color. Ohio has seen record gun violence this year, just one year after the mass shooting in Dayton shocked the nation. Gov. DeWine understands this reality. It is why he asked for gun violence prevention fixes and specifically stated that this bill was not among them.

The #StandWithOhio Coalition is incredibly disappointed to see Gov. DeWine prioritize the gun lobby’s interests over the safety of his state. Ohioans will remember the legislature and the Governor’s actions as the state continues to battle gun violence.”

About Stand Your Ground Laws

Beginning with Florida in 2005, a number of states enacted Stand Your Ground laws which fundamentally altered the law of self-defense. Traditionally, the law of self-defense put a premium on protecting life; the law imposed on private citizens a duty to try, if possible, to retreat from a dangerous confrontation prior to deploying lethal force in self-defense, with a narrow exception for confrontations occurring in their homes under the ‘castle doctrine.’ Stand Your Ground laws limit this duty to retreat even in contexts outside of the home.

Stand Your Ground laws threaten everyone’s safety, particularly Black Americans. These laws embolden racially-motivated vigilantism, undermine public safety, and encourage individuals to believe that, even if they could avoid a lethal confrontation, they can kill someone and later claim self-defense to avoid being held responsible. Read our fact sheet Listen to our podcast episode

The poll found that: