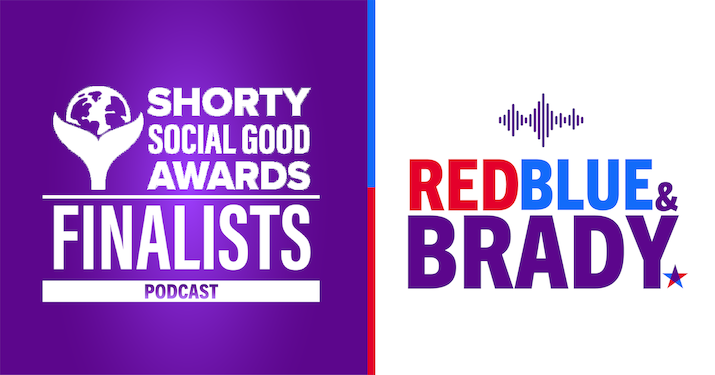 "Red, Blue, and Brady" is a Shorty Award finalist for its groundbreaking work on gun violence prevention and racial justice.

Washington, D.C., October 31, 2022 – Brady’s podcast, “Red, Blue, and Brady,” has been honored as a finalist for the Shorty Award for Best Podcast, the third such nomination for the groundbreaking podcast in as many years.

The Shorty Awards honor the best in production and development for several categories of content and social media, including podcast production. Other podcast nominees include Planned Parenthood’s “TONE” and ABC Audio’s “Life Out Loud with LZ Granderson.” “Red, Blue, and Brady” is also in contention for the voter-selected Shorty Audience Award.

“Red, Blue, and Brady” is also notable for its work in distilling the complicated issue of America’s gun violence epidemic so listeners can understand that solutions are possible, and what they can do to effect change and make our country safer. It’s the storytelling behind the statistics – and the emphasis on including gun owners and non-gun owners in the conversation – that makes “Red, Blue, and Brady” unique in the podcast space.

Winners will be announced November 16.

Vote for Our Podcast Listen to our podcast