The six common-sense gun violence prevention bills signed into law by Gov. Murphy illustrate the proactive, lifesaving policy solutions at our disposal, especially on the heels of the recent tragedies in Buffalo, Uvalde, and Highland Park. 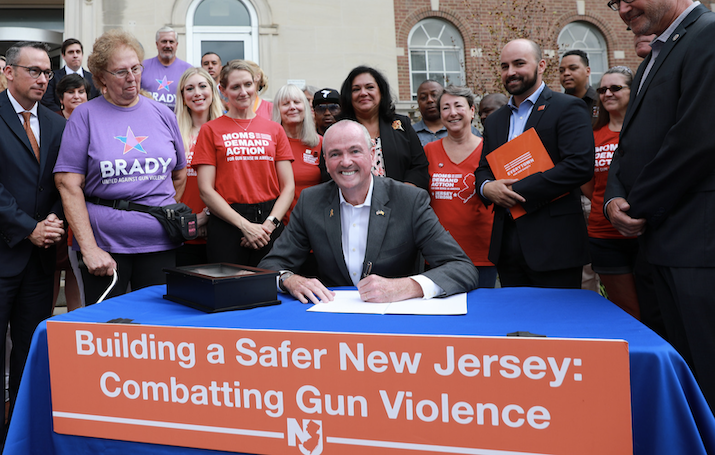 Governor Murphy signs an executive order to combat the crisis of gun violence at Morristown City Hall on September 10, 2019.

“Gov. Murphy has strongly and consistently called for common-sense gun violence prevention reforms. Today, the legislature has delivered these needed policies and they will become law. From investing in microstamping technology and the creation of pathways to hold the firearm industry accountable through civil litigation, these bills cement New Jersey at the forefront of cutting-edge gun violence prevention policies. These bills are landmark achievements and today’s action is historic. Particularly following the egregiously wrong and dangerous Supreme Court decision in the Bruen case, this action is a clear sign to New Jersey residents that their elected officials will not be deterred or intimidated from passing strong, life-saving laws. It is true more work must be done, including passage of bills raising the age of firearm possession from 18 to 12 and requiring safe storage of firearms, but the bills signed today will save lives. Brady thanks the New Jersey legislature for leading the way in passing life-saving gun violence prevention bills and Gov. Murphy for his continued leadership on this issue.

About Gun Violence in New Jersey

S.2905 bans certain weapons of 50 caliber or greater by revising the state definition of destructive device to include such weapons.

A.1302 requires manufacturers, wholesale dealers and persons engaged in the retail business of selling, leasing, or otherwise transferring handgun ammunition to maintain an electronic record-keeping system of ammunition sales and firearm information.

A.4368 requires firearm retailers to sell microstamping-enabled firearms upon determination of viability by the Attorney General.

A.1765 permits the Attorney General to bring cause of action for certain public nuisance violations arising from sale or marketing of firearms.