“Racist and Dangerous:” Brady Opposes Proposed Expansion of “Stand Your Ground” in Florida

Washington, D.C., November 13, 2020 - Florida Governor Ron DeSantis’ proposed expansion of the state’s ‘Stand Your Ground” law to include “interruption or impairment” of a business and “looting” among the permissible grounds for aggression would lead to further violence against Black and Brown residents and threaten public safety. Brady opposes this dangerous proposal that would only increase the racist effects of the state’s existing “stand your ground” policy.

“Gov. DeSantis’ proposal builds on the blood-soaked and racist legacy of Florida’s existing Stand Your Ground law. The data on the existing policy is clear: this law is overwhelmingly used to ‘justify’ the murder of Black and Brown people. To suggest expanding it to cover businesses and property is an appallingly obvious nod to factions calling for vigilante 'justice' against protestors supporting the movement for Black lives. This proposal is racist. It is dangerous. And, Floridians must oppose it."

“Throughout 2020 I have faced violent resistance to peaceful protests for racial equity and justice. Gov. DeSantis’ proposed bill would pour fuel on that fire, tacitly permitting lethal force against protestors. In fact, we know that is precisely what Florida’s Stand Your Ground bill has been used for - research shows that the law is more likely to be used to ‘justify’ the murder of a Black victim by a white perpetrator and that the law has a ‘quantifiable racial bias.’ Gov. DeSantis’ proposal will kill Black and Brown residents. It’s unconscionable and disgusting.” 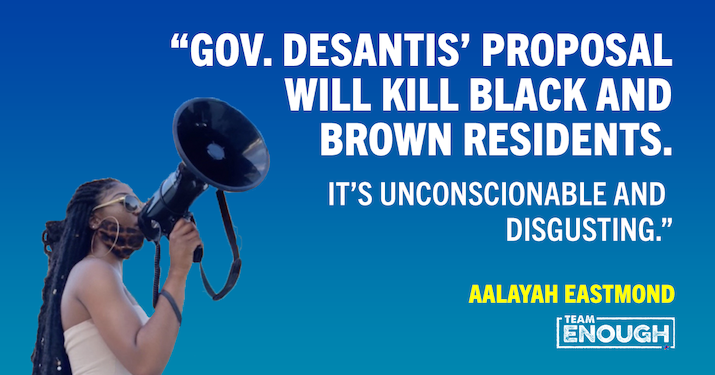 “In Jacksonville, there have already been over 460 shootings this year, well above 2019 levels. Gov. DeSantis governs the state that saw two of the largest and most horrific mass shootings in modern American history in Parkland and Pulse Nightclub. Young people in Florida have grown up with this reality and we will not accept more gun violence in our state. Gov. DeSantis’ policy would lead to violence and violence against our Black and Brown siblings, especially. This is unacceptable. We are asking every Floridian to oppose this, because the more that our government opposes our cause, our work in the community goes to waste.”

“In the Miami-Fort Lauderdale area, we’ve seen homicides increase by as much as 30 percent. The last thing our state and our region needs is an increase in gun violence, and that is precisely what Gov. DeSantis’ proposal would lead to. Studies show that Florida’s Stand Your Ground law increases gun violence and is used to justify the murder of Black and Brown residents. Gov. DeSantis would be putting a target on our backs. It is an absolute betrayal of his duty to protect all Floridians. He must withdraw this proposal.”

“Gov. DeSantis’ proposal is wrongheaded and contrary to the demands and desires of Florida’s residents. His proposed expansion of the state’s Stand Your Ground law will increase violence, particularly against Black and Brown residents. Instead of making our state safer, he would make it more dangerous. The American Medical Association found that Florida’s implementation of its Stand Your Ground law led to a 24.4 percent increase in homicides and a 32 percent increase in firearm-related homicides specifically. We don’t need more gun violence. The Governor must withdraw this proposal.”

About Stand Your Ground Laws:

Beginning with Florida in 2005, a number of states — including Georgia in 2006 enacted Stand Your Ground laws, which fundamentally altered the law of self-defense. Traditionally, the law of self-defense put a premium on protecting life; the law imposed on private citizens a duty to try, if possible, to retreat from a dangerous confrontation prior to deploying lethal force in self-defense (with a narrow exception for confrontations occurring in their homes). Stand Your Ground laws like Georgia’s limit this duty to retreat even in contexts outside of the home.

These laws were promoted by the NRA, the gun lobby in furtherance of the myth that the Second Amendment encompasses the right to armed confrontation and that guns increase public safety by reducing crime. These laws were also drafted and passed without any consideration of the fact that they would embolden racially- motivated vigilantism like the shooting deaths of Trayvon Martin in Florida and Ahmaud Arbery in Georgia. These laws undermine public safety and encourage reckless gun owners to believe that even if they could avoid a lethal confrontation, they can kill someone and later claim self-defense to avoid being held responsible for taking the lives of individuals — particularly people of color — they falsely perceive as a threat.

The dark reality of Stand Your Ground laws is clear: