Washington, D.C., Jul 29, 2022— Today, Brady celebrates the bipartisan support and passage of the Assault Weapons Ban of 2021 in the U.S. House of Representatives. This is the first time a ban on assault weapons has passed out of the House since 1994, the year the original assault weapon ban was signed into law. Brady now urges the Senate to take up and pass this bill without delay so that President Biden can sign it into law, as he has promised to do.

“Once again, Speaker Pelosi and the gun violence prevention majority in the House of Representatives have taken action to address the public health epidemic we uniquely face here in America, with the urgency it deserves. Weapons of war have no place in our communities and every day we wait to renew and improve the Assault Weapons Ban, more lives will be lost. As we’ve seen over and over again in communities like Buffalo, Highland Park, Uvalde, and too many others to name, assault weapons are the weapons of choice for mass shooters because they are designed to inflict the very damage we see play out time after time.

We have the power to prevent these uniquely American tragedies, and this ban on assault weapons will be critical to accomplishing that goal. Brady applauds Congressman Cicilline and the House of Representatives for their leadership on this issue and calls on the Senate to abandon partisan gridlock, listen to the will of the American public, and pass this bill to keep our communities safe.”

This law would make it unlawful for a person to import, sell, manufacture, or transfer:

Firearms and high capacity magazines manufactured before the date of enactment will remain legal to possess. Individuals are allowed to sell existing assault weapons, but only after the completion of a Brady Background Check. High-capacity magazines may be kept by their owners, but cannot be transferred except to a government buyback program.

About the Lethality of Assault Weapons: 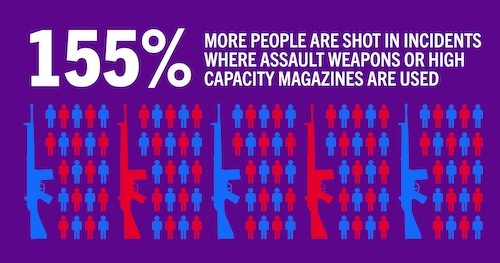 About the 1994 Assault Weapons Ban

In 1994, Congress enacted a federal assault weapons ban as part of the Violent Crime Control and Law Enforcement Act. Brady’s namesakes, Jim and Sarah Brady, were instrumental in passing this life-saving law, working hand-in-hand with legislators every step of the way. However, the ban expired in 2004 and was not renewed. In the decade after the ban expired, over 300 people were shot and killed in 34 mass shootings, representing a 183% increase in massacres and a 239% increase in fatalities. 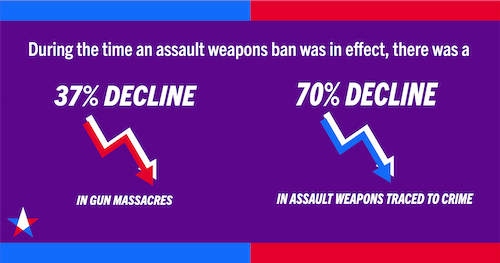