Washington, D.C., January 13, 2020 – Today, the Judiciary Committee of the Virginia State Senate voted to send four common-sense gun violence prevention bills to the full Senate. The bills address a range of policies from expanded background checks to instituting extreme risk protection order policies to help ensure that those who are a danger to themselves or others do not possess weapons.

“A little over two months ago, Virginia voters sent a clear message: they want common-sense gun safety reforms in our Commonwealth. Today, the Virginia State Senate Judiciary Committee took the first step in answering that grassroots call for reform. Today’s action will bring policies proven both effective and constitutional up for a vote in the Senate. Policies that will strengthen background checks, institute extreme risk prevention orders, limit the cadence of gun purchases within reasonable limits, and allow local governments to freely regulate the weapons in their community will all help to keep weapons out of the hands of those who are a danger to themselves and others and to make all our communities safer. I applaud the committee for taking up these common-sense policies in the less than one week since the legislative session’s opening. As a Virginia voter, this action is what I voted for.” 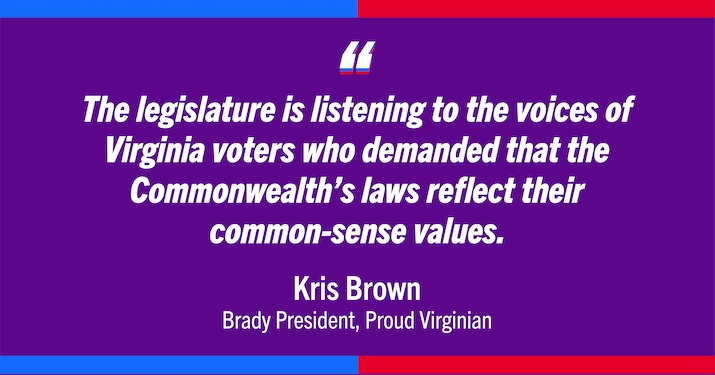 “Policies to create a comprehensive universal background check system, implement a one-handgun-a-month policy to reduce straw purchasing and gun trafficking, pass an extreme risk law and repeal Virginia’s firearms preemption law will go a long way in reducing gun violence and injury throughout all of Virginia. We know that when states enact similar legislation, they have lowered their own firearm death rates and research shows that the courageous actions of this body could do the same for the Commonwealth.”

About the bills passed in today’s hearing:

S.B. 35 – Repeals existing state law that preempts local governments from “adopt[ing] or enforce[ing] any resolution . . . governing the purchase, possession, transfer, ownership, carrying, storage or transportation of firearms.” This existing law stops local governments from enacting legally sound and common-sense regulations of weapons in their jurisdictions. Repeal of this law would empower local governments to create and implement solutions that best address the needs of their constituents and communities.

S.B. 69 – Limits the cadence at which an individual can purchase a handgun to one weapon per month, a policy that was previously enacted in the Commonwealth from 1993 to 2012 and was associated with a dramatic reduction in firearms from Virginia being recovered at crime scenes in other states.

S.B. 270 – Institutes an extreme risk law, sometimes known as “red flag laws,” that provides a way for the courts and law enforcement to temporarily remove a firearm from individuals who are a proven risk to themselves or others. Extreme risk laws have been proven effective, upheld as constitutional and are a critical tool to help ensure that temporary crises do not become permanent tragedies.

“Since the mass shooting at Virginia Tech in 2007, more than 11,000 Virginians have died from gun violence. This epidemic is why voters ranked gun policy as one of their top issues in last year’s election, a fact shown in multiple polls and at the ballot box. We have a gun violence prevention majority in Virginia because of this grassroots effort. We look forward to continued leadership on this issue.”