“Plaintiffs fail to demonstrate a likelihood of success on the merits of their Second Amendment claim.”

“The U.S. District Court for the Central District of California decision upholds a longstanding interpretation of the Second Amendment, denying an NRA claim that California Governor Gavin Newsom’s executive order in response to coronavirus violates individual Second Amendment rights. The court has upheld that, in response to public health and safety emergencies like the coronavirus pandemic, state and local governments may take emergency actions to protect citizens, including restricting certain rights and activities.

The NRA is exploiting the current crisis to further a radical misinterpretation of the Second Amendment, one in which the public right to live safely can be infringed by a supposed individual right to buy a gun immediately, without restriction. No court case has held that the Second Amendment includes such unlimited rights. All of the Amendments in the Constitution are limited by other rights enshrined in law, including the public’s right to safety. Today’s decision recognizes that the public health interest in curbing Coronavirus requires extraordinary measures to be taken to protect our public health and well being. Although we expect that the NRA will continue to assert that profits from gun sales must supersede public health interests, we hope this decision gives them pause in these efforts that put consumers at risk.

While an intermediate decision, this order should guide other courts to find that broad temporary closures are entirely consistent with the Constitution. The Second Amendment is not absolute, and it does not entitle people to spread coronavirus while shopping for guns.” 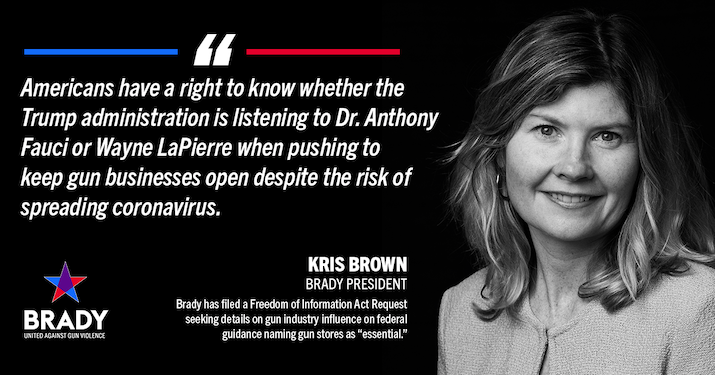 The Honorable Andre Birotte Jr. denied the application for a temporary restraining order on actions taken by the state of California and city of Los Angeles that resulted in the temporary closure of gun stores.

Judge Birotte explicitly found that the Plaintiffs’ Second Amendment claim against the Executive Order “is not ripe for judicial resolution,” citing that the executive order does not close gun stores, instead designating that authority to local leaders, and that a claim against any future state order that did so is “speculative.”

The City’s and County’s stated objective — reducing the spread of COVID-19, a highly dangerous and infectious disease — undoubtedly constitutes an important government objective. Moreover, because this disease spreads where “[a]n infected person coughs, sneezes, or otherwise expels aerosolized droplets containing the virus,” (Dkt. No. 21) the closure of non-essential businesses, including firearms and ammunition retailers, reasonably fits the City’s and County’s stated objectives of reducing the spread of this disease.”

This interpretation is wholly consistent with Brady’s position that local authorities are well within their rights to temporarily close gun stores in the interest of stopping the spread of coronavirus.