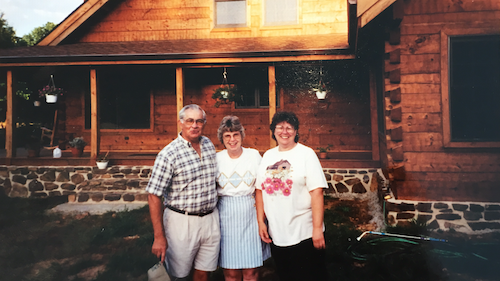 Don and LaDonna with Judy Miller, outside of their home

On November 6th, 2015, a gun was acquired illegally via straw purchase.

On November 7th, 2015, Donald Rice (75) and his wife Ladonna (71), were shot and killed with that gun, during a home robbery. The assailants then set fire to the Rices' home in an attempt to cover up their crime.

Miles away from Midway, Arkansas, Judy and Bill Miller, got a terrifying call. Judy, Don's sister, was left waiting to hear what had happened to her beloved older brother. In the days that followed the shooters were apprehended, but questions were raised: how did they get access to the gun?

In the days, weeks, months, and years that followed, Bill and Judy, along with Brady legal and outside council, joined together to bring a suit against the seller who allowed this straw purchase – all to help prevent such a tragedy from happening to other families. Today, they joined hosts Kelly and JJ, as well as Erin Davis (Senior Counsel with Brady Legal), to discuss Don and Ladonna, what the case was like, and what fighting for gun violence prevention means for them.

Mentioned in this podcast:
US Supreme Court Upholds Law Prohibiting Straw Purchase of Guns (Brady)
Amid Dearth of Federal Action on Straw Buyers, States Forge Ahead on Their Own (the Trace)