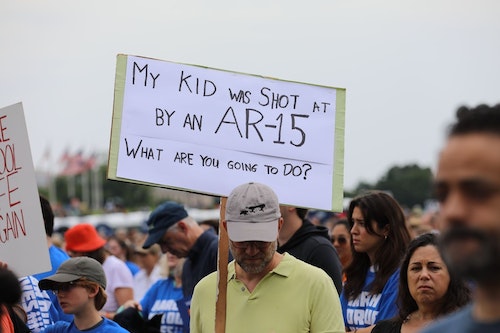 We lose over 40,000 Americans every year to gun violence, and their loss is felt by thousands more. Millions more are injured, or living, with gun violence injuries. Folks who have been thus inducted into this terrible US club of gun violence survivorship have taken up the mantle of fighting for gun violence prevention, hoping to protect others from experiencing the pain they live with. No survivor knows this more than Rachael Joseph, who came to gun violence prevention work after the horrific murder of her beloved aunt, Shelley. In 2018 she founded Survivors Lead, an organization devoted to putting survivors – and trauma informed care – at the front of the gun violence movement. She joined hosts Kelly and JJ to share Shelley’s life, what life is like for survivors in the movement, and what we all can do to build a more equitable movement (and, of course, end gun violence).

Mentioned in this podcast:
Why I fight for gun safety - for my Aunt Shelley (Star Tribune)
The Stigma of Family Gun Violence (Medium)
Survivors of gun violence are sharing pictures of their injuries and crime scenes: 'This is our reality' (Insider)
Survivors Taking Lead On Gun Reform (TC Jewfolk)