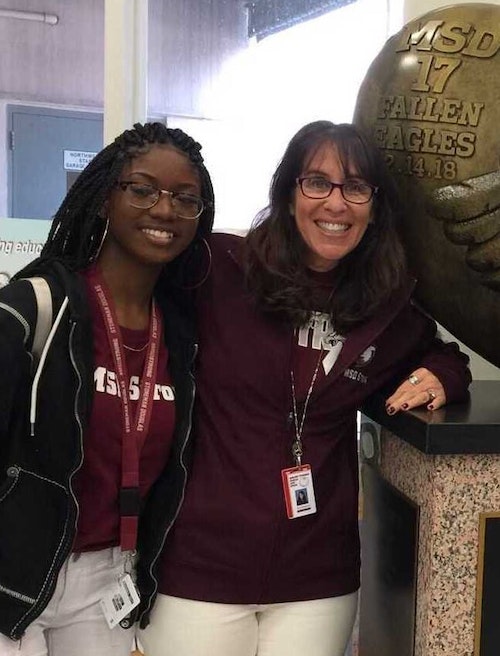 Photo of Aalayah and Ivy, as provided by Ivy Schamis

Three years ago, on February 14th 2018, a gunman armed with an AR-15 attacked Marjory Stoneman Douglas High School in Parkland, Florida, killing 14 children and three staff members. In the aftermath, survivors of that shooting have stood up for gun violence prevention, fighting daily for common-sense gun violence prevention laws. But what is it like for those survivors? What do they wish all people knew about the daily struggles of these survivors-turned-activists? And, what can we all be doing better to support them?

To find out, hosts Kelly and JJ are joined by Ivy Schamis and Aalayah Eastmond, survivors from class 1214. Ivy was an almost 20-year veteran social studies teacher, and Aalayah was her junior student. Today, Ivy has relocated to DC where she works in school administration, and Aalayah is an executive council member of Team Enough, co-founder of Concerned Citizens D.C., an intern with PayOurInterns, and a full time college student at Trinity Washington University. Join them, and learn about the person behind that title of "survivor."

Mentioned in this podcast:
Parkland survivor wants a different kind of gun reform movement: One that centers Black lives (Mashable)
Parkland, One Year Later: Ivy Schamis, a Teacher of Hope (Rolling Stone)
Devastating Emotional Toll of Shooting Drove Some Teachers Away From MSD (ABC 6)
How to support survivors and people impacted by gun violence (Brady)