153: Uplifting Survivors and Victims, Not Perpetrators 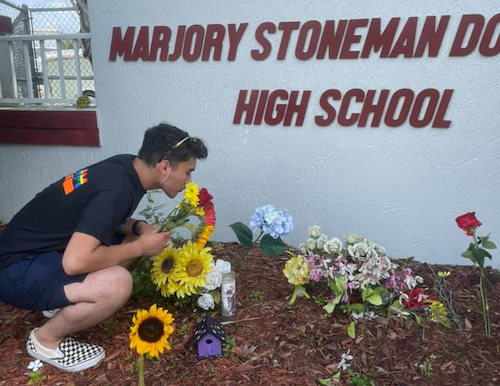 This week, the shooter who killed 17 students and faculty members and injured 17 others in the deadliest shooting at a high school in US history plead guilty to 17 counts of murder and 17 counts of attempted murder. The plea comes more than three and a half years after the Valentine's Day shooting at Marjory Stoneman Douglas High School in Parkland, Florida. As a result of the shooter's plea, attention has once again focused on the perpetrator of a massacre, rather than the lives senselessly taken. Constant coverage and reporting on perpetrators, rather than those impacted, does more harm than good. To discuss why that is, host JJ is joined by Team Enough Executive Council members Stephan Abrams and Aalayah Eastmond, who is also a survivor of the Parkland attack. Together, all three discuss the importance of the No Notoriety Campaign and its mission of shifting attention from shooters to victims and survivors

Then JJ sits down with Tom Teves to discuss how the Teves family created No Notoriety after their eldest son Alex was the Aurora Colorado movie theater shooting in July of 2012 while shielding his girlfriend, Amanda.. That shooting left 12 people dead and 70 injured, but in the long days of media coverage that followed, attention was largely focused on the profile of the shooter -- not on the acts of heroism done by people like Alex or the lives of the taken. Tom goes on to share why the campaign is so important, and how individuals and news organizations can “minimize harm” while reporting on mass shootings.

Brady urges attention to the ongoing needs of survivors and affected families, not shooters (Brady)
FBI to media: Don't name mass shooters (KSAT)
Contagion in Mass Killings and School Shootings (PLOS One)
A call to end the media coverage mass shooters want (Ted)
Don’t Name Them, Don’t Show Them, But Report Everything Else: A Pragmatic Proposal for Denying Mass Killers the Attention They Seek and Deterring Future Offenders (American Behavioral Scientist)

A version of this podcast initially ran as "A Matter of No Notoriety."