68: the Hidden History of the Jackson State Shooting 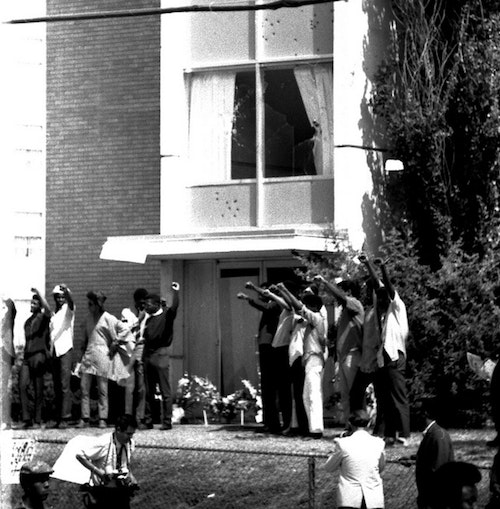 Jackson State students were joined by other local young people as they kept a vigil and protected evidence of the shootings outside Alexander Hall. Photo from the collection of, and with the permission of Dr. Doris A. Derby.

On the evening of May 14, 1970, dozens of police officers, responding to reports of rioting and unrest, descended on the Jackson State campus in Jackson, Mississippi, armed with not just their standard service weapons but shotguns and submachine guns as well. Equipped more like soldiers than police and accompanied by an armored vehicle the city, these men, all of whom were white, approached a crowd of students, all of whom were black, and without cause or provocation barraged the young men and women with 28 straight seconds of gunfire, injuring 12 and killing 2.

Though it occurred not even two weeks after the infamous Kent State shooting, Americans do not remember the massacre at Jackson State nearly as well, if at all — a fact possibly related to the former's victims being white northerners and the latter's being black southerners. To discuss the Jackson State shootings and how race is involved in both revealing and concealing the event, JJ welcomes aboard Kelly Sampson, Brady legal counsel; Cordy Galligan, Brady's Vice President of Communications; and Dr. Nancy Bristow, Chair of the History Department at the University of Puget Sound and author of Steeped in the Blood of Racism: Black Power, Law and Order, and the 1970 Shootings at Jackson State College.