16-year-old Daniel “Bud” Williams, a high school basketball star about to start his junior year, was shooting baskets outside his home in Buffalo, NY on August 16, 2003 when he was severely wounded in a drive-by shooting. As Williams picked up his basketball, a man in a car parked on the street opened fire, hitting Bud in the stomach. The assailants sped off, but police quickly apprehended the shooter, Cornell Caldwell, in possession of a Hi-Point 9mm semi-automatic pistol. Investigation revealed that Caldwell shot Williams mistakenly thinking he was a rival gang member.

The handgun used in the shooting was traced to gunrunner James Nigel Bostic, who according to The Buffalo News purchased at least 250 handguns at Dayton, Ohio gun shows between May and October 2000. Almost 200 of these guns were obtained from dealer and distributor Charles Brown, from whom Bostic purchased mostly Hi-Point Saturday Night Special handguns in bulk sales for under $100 each before trafficking them to Buffalo, where Bostic sold them on the street for two to three times his purchase price.

The carnage wrought by Bostic’s trafficking ring was the subject of a June 2005 four-part series in the Buffalo News entitled “The Damage Done,” which exposed the deadly role that gun traffickers and the gun industry play in supplying firearms to dangerous criminals. 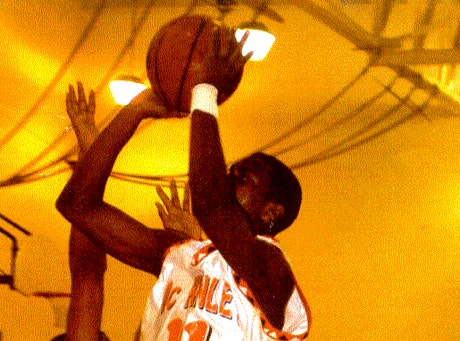 On July 28, 2005, the Brady Center filed a lawsuit on behalf of Daniel Williams and his family against the gun companies responsible for arming gang member Cornell Caldwell through their alleged negligence. According to the suit, James Bostic and his girlfriend, Kimberly Upshaw, purchased guns from Charles Brown at an Ohio gun show on five occasions, including a single sale of 87 identical handguns, one of which was used to shoot and injure Williams. The suit also argues that though Bostic committed obvious straw purchases by having girlfriends fill out the paperwork while he selected and paid for the guns, Brown did nothing to prevent these clearly illegal sales.

The lawsuit contends that it should have been obvious to Charles Brown that Bostic was not buying almost 200 guns for his personal use, but that he intended to sell those guns on the criminal market. According to the suit, in addition to the guns recovered in Buffalo, crime guns sold by Brown and his company included 630 guns that had been recovered in connection with New York City crimes, and a semiautomatic rifle used in the 1999 Columbine High school massacre.

Daniel Williams’ case against Brown and Hi-Point has been one of the longest in Legal Action Project history. The defendants spent four years on an unsuccessful attempt to have the case moved to federal court, before ultimately filing a motion to dismiss the case on the grounds that it was barred by the federal Protection of Lawful Commerce in Arms Act (PLCAA). This argument was accepted by a trial court judge, who dismissed the case on April 25, 2011 and denied a motion for reargument four months later.

The Brady Center then successfully appealed the decision to the New York Appellate Division, which unanimously overturned the dismissal of the case; the court accepted Brady’s arguments and reinstated the case on October 5, 2012, and denied a motion for another argument on February 1, 2013. The appeals court’s ruling was a landmark decision: for the first time since the passage of PLCAA, a court ruled that a gun manufacturer and distributor can be held liable for supplying guns to traffickers. This precedent won by the Brady Center strikes a direct blow to the gun lobby’s attempt to shield the industry from responsibility for their role in fueling gun violence.

The case has now returned to the trial court and is currently in discovery. In addition to the Brady legal team, Williams is represented by Terrence M. Connors and a team from his Buffalo law firm Connors & Vilardo, LLP.