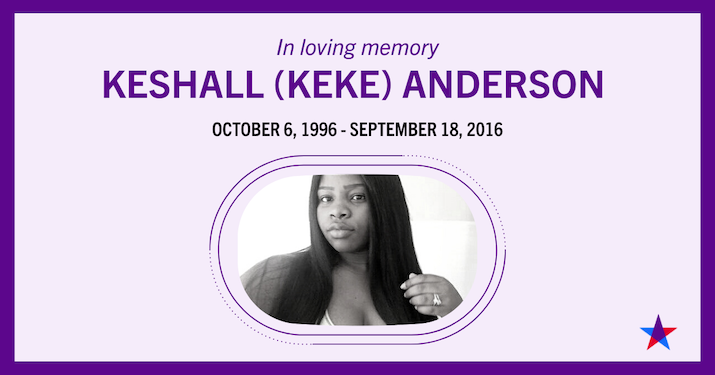 The Court unfavorably ruled to dismiss the case against Cabela’s. Disappointed by the decision for Keke Anderson’s family, we are continuing to fight to hold gun dealers accountable in Delaware. We are currently working in the state legislature to repeal Delaware’s gun industry immunity statute.

A gun dealer sold firearms to a straw purchaser who supplied the criminal gun market. One of the firearms was used by a Wilmington gang member to shoot and kill a young mother as she was walking on the street in a drive-by shooting. Brady sued the dealer, Cabela’s, for negligently selling a firearm to a dangerous prohibited purchaser.

Cabela’s supplied a gun to John Kuligowski, a convicted felon, through a straw purchase by his girlfriend of handgun and ammunition at a Cabela’s store in the Christiana Mall in Delaware.

On September 18, 2016, 19-year-old Keshall “KeKe” Anderson was walking on the streets of Wilmington with a friend when she was caught in a drive-by shooting. She was fatally shot multiple times with the gun Cabela’s sold, leaving behind a six month old son. The shooters, were minors unable to legally purchase a gun.

Brady and Hudson and Castle law in Wilmington filed a wrongful death suit in Delaware’s Superior Court on behalf of KeKe Anderson’s family against Cabela’s. The suit alleges that the company negligently sold to a straw purchaser, abetting gun trafficking which led to KeKe Anderson’s death. Cabela’s moved to dismiss the case, claiming that Delaware law immunizes licensed gun dealers from civil liability. Brady argued that the state statute does not broadly immunize gun dealers, especially when they violate gun laws; and Cabela’s may be held accountable for its negligent actions that lead to KeKe Anderson’s death.

Oral Arguments were heard in front of the Supreme Court of Delaware on November 20, 2019, appealing the Superior Court decision regarding Cabela’s motion to dismiss the case (watch argument here). We are currently awaiting a decision from the court.