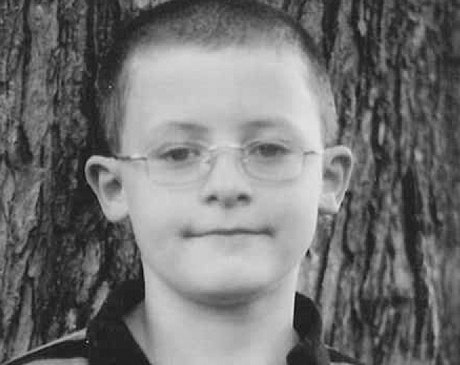 Zeus Graham was born on July 3, 1995, and was murdered on September 5, 2003, by his father, Russell Graham, with a gun he obtained in a straw purchase. Elizabeth Shirley, the abusive Graham’s estranged ex-wife, took her 8-year-old son Zeus for a court-ordered visit with his dad. She didn’t know that Graham had just bought a shotgun.

Earlier that day, the owners of a local gun dealer, Baxter Gun & Pawn, in Baxter, KS, showed Graham a shotgun he had called about. After Graham told the owners, Joe and Patsy George, that he was a felon (making him a prohibited purchaser under law), they allowed his grandmother, Imogene Glass, to fill out purchase forms. The Georges also conducted the background check on Glass even though Graham selected the gun, paid for the gun in cash, purchased the ammo, and carried the gun out of the shop.

That night, Graham called his ex-wife, Elizabeth Shirley. He told her about the straw purchase and said he would kill their son unless she came to his house. By the time Shirley had called for help and then called Graham back, both Zeus and Graham were dead by the gun straw purchased from the Georges. After killing Zeus, Graham had turned the gun on himself. When the police visited the Georges the next day, they falsely claimed that Glass had paid for the shotgun with a check, which they were unable to produce. They also told law enforcement that their surveillance video had been destroyed by a malfunction and that they had discarded the ruined tape.

Shirley filed a suit against Glass and the Georges in 2005, alleging that they were liable for her son’s death, which she argued was a foreseeable result of knowingly selling a gun to a felon. After the trial court dismissed the case, Shirley turned to Brady.

The Brady legal team appealed the dismissal of the negligence claim to Kansas’s Supreme Court. On July 19, 2013, the Court unanimously ruled in Shirley’s favor, finding that the Georges could be liable for Zeus’s death under negligence, and ruling that gun dealers must use the “highest standard of care” to avoid selling guns to felons and dangerous people. This ruling set a strong and expansive preceent on gun dealer responsibility in Kansas, and shows that gun dealers should be held to a different standard of care than other tort defendants.

In June 2015, the Georges settled the case with Shirley, agreeing to pay the maximum their insurance policy would allow plus a contribution from their personal assets. They have also pledged to take precautions to prevent selling firearms to dangerous people in the future.

These victories helped change the legal landscape in Kansas by holding bad apple gun dealers accountable for contributing to gun violence. This sends a powerful message to gun dealers who choose to profit off of criminals instead of abiding by the law.