Under the leadership of President Kris Brown, Brady is one of America’s oldest and boldest gun violence prevention groups, and our history of success goes back decades.

In 1974, Dr. Mark Borinsky founded the National Council to Control Handguns after being robbed and nearly murdered at gunpoint. The organization evolved in 1980 when it became Handgun Control, Inc. (HCI). It was just one year later when HCI’s and the country’s future changed forever. 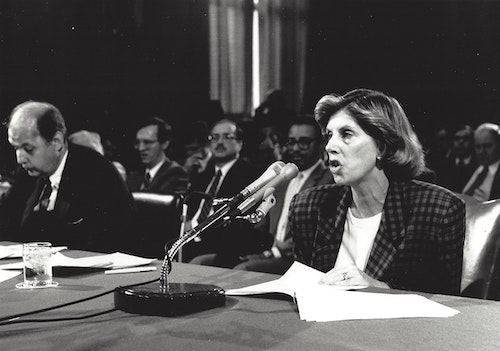 Jim “the Bear” Brady had achieved a lifelong dream when he was named White House Press Secretary under President Ronald Reagan. However, his service was cut short on March 30, 1981, during an assassination attempt against the president. In addition to President Reagan, Jim and two law enforcement officers were shot. Jim suffered a serious head wound that left him partially paralyzed for life. Although Jim never returned to his position after the shooting, he kept the title for the remainder of President Reagan's presidency.

At HCI, Sarah and Jim led the fight to pass federal legislation requiring background checks for all gun sales. Sarah and Jim spent years navigating the halls of Congress, meeting with legislators across party lines to generate enough votes to pass the “Brady Bill,” a law they knew would save lives. Brady President Kris Brown was one of the many staffers on Capitol Hill working to pass the original version of the Brady Bill.

The original Brady legislation was introduced in 1988. It took six votes over seven years and three presidencies until Sarah, Jim, and their team were able to declare victory.

On November 30, 1993, after Sarah and Jim’s seven-year battle, President Bill Clinton signed the Brady Bill into law. Brady Background Checks would now be required on all handgun purchases from federally licensed firearm dealers. The signing of the Brady Bill was only the beginning. Sarah continued to advocate for common-sense gun laws at the state and federal level throughout the rest of her life.

In December 2000, the Boards of Trustees for Handgun Control and the Center to Prevent Handgun Violence voted to honor Jim and Sarah Brady’s hard work and commitment to gun control by renaming the two organizations the Brady Campaign to Prevent Gun Violence and The Brady Center to Prevent Gun Violence. That same year, the Brady Campaign and Center joined with the Million Mom March to expand their efforts to communities throughout the country. Jim and Sarah both continued their commitment to preventing gun violence for the remainder of their lives, with Sarah serving as the Chair of both organizations until 2015.

In 2016, Brady welcomed the leadership of Kris Brown as co-president. One year later Kris made history by becoming the organization's first woman president. At Brady, she has shaped the conversation on gun violence as a national health care crisis, launched the organization’s groundbreaking safe storage program to End Family Fire, and oversaw the formation of Team ENOUGH — Brady’s youth-led initiative founded after the Marjory Stoneman Douglas High School massacre in Parkland, FL.

Today, led by Kris Brown, who saw Jim and Sarah’s bipartisan impact on Capitol Hill firsthand, Brady continues to uphold the Brady’s legacy by uniting Americans from coast to coast, red and blue and every color, to combat the epidemic of gun violence. In Congress, courts, and communities across the country, Brady can be counted on to lead the fight for a safer country for all of us. Brady has always been more than a name, it’s a passion for change.