1.) Where do you live and how did you first get involved in the gun violence prevention movement and Brady?

Rick: We live in Lakeforest Park, WA, just outside of Seattle. I can pinpoint the date because it was within the first few years of our marriage, early 1970s. We were in our house that we were renting and I was looking at a magazine and saw an advertisement for Handgun Control Inc. I knew I wanted to be involved right away, having lived through my high school years, when the Kennedys and MLK were assassinated. I also lost a cousin to a firearm suicide, which made me think we have too many firearms in the wrong hands. The issue at the time really was handguns, which are not used for hunting, but for shooting people.

Peggy: I started supporting gun violence prevention because of Rick. He took me to a play where someone got shot and Rick was so upset, and then he told me about his cousin’s suicide, which was just so hard on the entire family. I just thought, no family should experience anything like that.

2.) What gives you hope about the gun violence prevention movement and what frustrates you?

Rick: In the U.S., there’s been recognition and a gradual change of heart of the majority of Americans in terms of what should be in the hands of civilians. There have been small steps forward, that sometimes get rolled back, but for a while there, there was an Assault Weapons Ban. Then, in Washington State today, there’s a clear movement for a number of different measures, including high-capacity magazine restrictions, which gives me hope.

3.) How do you see America's epidemic of gun violence impacting students in your schools? impacting your county, state, and country?

Peggy: We both volunteer in the local elementary school and it’s mind-boggling that they have these lockdown drills. We went through one of the drills and it was just eerie. We were in a classroom with the blinds down and it was just dead quiet. It was so frightening and I thought, “what if this was real?” Then who knows what might come blasting through a door, and if you had an assault weapon, you could do quite a bit with a door.

Rick: I play the trumpet and so we each perform in more than one group. Also, Peggy’s a botanist and so she got the two of us out of the house on trips to look for bitter roots and cacti that bloom only in central Washington.

Peggy: I play the piano and sing. We also just like to volunteer a lot. We tutor at the local school, and every two weeks at the veterinary mission. People who are homeless or poorly housed can get free veterinary care for their animals. And it becomes a community get together, we visit with each other. 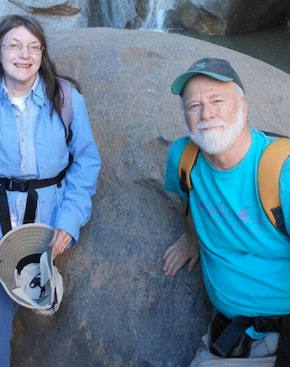