Kristin Anundsen is involved in many causes and has supported Brady since it was called Handgun Control, Inc! At 80 years young, she lives in San Francisco and is active in women’s rights issues, the arts, climate change activism, and says that gun violence prevention “is way up there."

Kristin Anundsen, a Supporter of Brady for Over 20 Years!

She started to support Brady because she “was just so astounded that the NRA and the gun dealers and manufacturers did not seem to care if people died because of guns.” She started her activism with anti-war protests in the 1960s and continued after moving to San Francisco.

The most recent protest she did was the youth protest for climate change in San Francisco. She feels our youth are our hope for the future because they are really concerned, and that goes for gun control too. “That's what gives me hope, all these young people saying we have to stand up for this," said Kristin.

She worries about children having to do active shooter drills, saying, “that’s just horrible that they have to do that and if there weren't so many guns around, they wouldn't have to.” In reflecting about her own childhood, she said, “There didn't used to be school shootings. When I was growing up, we didn't even lock our doors!”

A fun hobby for Kristin is crafting greeting cards and jewelry. She has a little studio in the back of her property and she even made a pair of earrings into rolls of toilet paper for these times! 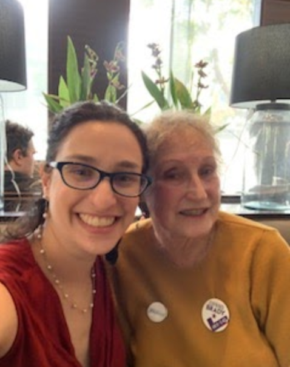